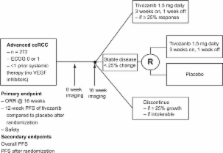 Tivozanib is a novel vascular endothelial growth factor receptor tyrosine kinase inhibitor (VEGF TKI). Among other VEGF TKIs, tivozanib stands apart due to its selective kinase inhibitory properties as well as its high potency for inhibiting VEGF receptors 1 and 2. Tivozanib has been evaluated in several clinical trials including a Phase I and Phase II trial demonstrating safety and efficacy for patients with advanced clear cell renal cell carcinoma (RCC). A pivotal randomized Phase III trial comparing the front-line use of tivozanib to sorafenib in patients with metastatic clear cell RCC has been reported. The clinical development of tivozanib and results of these important studies will be reviewed. Also, the potential placement of tivozanib among currently US Food and Drug Administration approved agents for advanced RCC will be discussed.

Mutations of the VHL tumour suppressor gene in renal carcinoma.

William Kaelin,  William Y Kim (2004)
Germline inactivation of the von Hippel-Lindau (VHL) tumor suppressor gene causes the von Hippel-Lindau hereditary cancer syndrome, and somatic mutations of this gene have been linked to the development of sporadic hemangioblastomas and clear-cell renal carcinomas. The VHL tumor suppressor protein (pVHL), through its oxygen-dependent polyubiquitylation of hypoxia-inducible factor (HIF), plays a central role in the mammalian oxygen-sensing pathway. This interaction between pVHL and HIF is governed by post-translational prolyl hydroxylation of HIF in the presence of oxygen by a conserved family of Egl-nine (EGLN) enzymes. In the absence of pVHL, HIF becomes stabilized and is free to induce the expression of its target genes, many of which are important in regulating angiogenesis, cell growth, or cell survival. Moreover, preliminary data indicate that HIF plays a critical role in pVHL-defective tumor formation, raising the possibility that drugs directed against HIF or its downstream targets (such as vascular endothelial growth factor) might one day play a role in the treatment of hemangioblastoma and renal cell carcinoma. On the other hand, clear genotype-phenotype correlations are emerging in VHL disease and can be rationalized if pVHL has functions separate from its control of HIF.

S. Halabi,  E Rosenberg,  E Small … (2008)
Bevacizumab is an antibody that binds to vascular endothelial growth factor (VEGF) and has activity in metastatic renal cell carcinoma (RCC). Interferon alfa (IFN) is a historic standard first-line treatment for RCC. A prospective, randomized phase III trial of bevacizumab plus IFN versus IFN monotherapy was conducted. Patients with previously untreated, metastatic clear-cell RCC were randomly assigned to receive either bevacizumab (10 mg/kg intravenously every 2 weeks) plus IFN (9 million U subcutaneously three times weekly) or the same dose and schedule of IFN monotherapy in a multicenter phase III trial. The primary end point was overall survival (OS). Secondary end points were progression-free survival (PFS), objective response rate (ORR), and safety. Between October 2003 and July 2005, 732 patients were enrolled. The prespecified stopping rule for OS has not yet been reached. The median PFS was 8.5 months in patients receiving bevacizumab plus IFN (95% CI, 7.5 to 9.7 months) versus 5.2 months (95% CI, 3.1 to 5.6 months) in patients receiving IFN monotherapy (log-rank P < .0001). The adjusted hazard ratio was 0.71 (95% CI, 0.61 to 0.83; P < .0001). Bevacizumab plus IFN had a higher ORR as compared with IFN (25.5% [95% CI, 20.9% to 30.6%] v 13.1% [95% CI, 9.5% to 17.3%]; P < .0001). Overall toxicity was greater for bevacizumab plus IFN, including significantly more grade 3 hypertension (9% v 0%), anorexia (17% v 8%), fatigue (35% v 28%), and proteinuria (13% v 0%). Bevacizumab plus IFN produces a superior PFS and ORR in untreated patients with metastatic RCC as compared with IFN monotherapy. Toxicity is greater in the combination therapy arm.