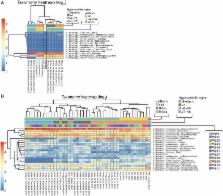 Sequencing of 16S rRNA gene tags is a popular method for profiling and comparing microbial communities. The protocols and methods used, however, vary considerably with regard to amplification primers, sequencing primers, sequencing technologies; as well as quality filtering and clustering. How results are affected by these choices, and whether data produced with different protocols can be meaningfully compared, is often unknown. Here we compare results obtained using three different amplification primer sets (targeting V4, V6–V8, and V7–V8) and two sequencing technologies (454 pyrosequencing and Illumina MiSeq) using DNA from a mock community containing a known number of species as well as complex environmental samples whose PCR-independent profiles were estimated using shotgun sequencing. We find that paired-end MiSeq reads produce higher quality data and enabled the use of more aggressive quality control parameters over 454, resulting in a higher retention rate of high quality reads for downstream data analysis. While primer choice considerably influences quantitative abundance estimations, sequencing platform has relatively minor effects when matched primers are used. Beta diversity metrics are surprisingly robust to both primer and sequencing platform biases.

T. Magoc,  Steven Salzberg (2011)
Next-generation sequencing technologies generate very large numbers of short reads. Even with very deep genome coverage, short read lengths cause problems in de novo assemblies. The use of paired-end libraries with a fragment size shorter than twice the read length provides an opportunity to generate much longer reads by overlapping and merging read pairs before assembling a genome. We present FLASH, a fast computational tool to extend the length of short reads by overlapping paired-end reads from fragment libraries that are sufficiently short. We tested the correctness of the tool on one million simulated read pairs, and we then applied it as a pre-processor for genome assemblies of Illumina reads from the bacterium Staphylococcus aureus and human chromosome 14. FLASH correctly extended and merged reads >99% of the time on simulated reads with an error rate of <1%. With adequately set parameters, FLASH correctly merged reads over 90% of the time even when the reads contained up to 5% errors. When FLASH was used to extend reads prior to assembly, the resulting assemblies had substantially greater N50 lengths for both contigs and scaffolds. The FLASH system is implemented in C and is freely available as open-source code at http://www.cbcb.umd.edu/software/flash. t.magoc@gmail.com.