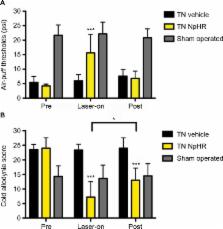 TN lesions were established in animals by generating a chronic constriction injury of the infraorbital nerve, and the animals received injections of AAV-hSyn-eNpHR3.0-EYFP or a vehicle (phosphate-buffered saline [PBS]) in the ACC. The optical fiber was fixed into the ipsilateral ACC after the injection of adeno-associated virus plasmids or vehicle. Behavioral testing, consisting of responses to an air puff and cold allodynia, was performed, and thalamic neuronal activity was monitored following optical stimulation in vivo. Optical stimulation experiments were executed in three steps: during pre-light-off, stimulation-light-on, and post-light-off states. The role of the optical modulation of the ACC in response to pain was shown using a combination of optical stimulation and electrophysiological recordings in vivo.

Ofer Yizhar,  Lief Fenno,  Matthias Prigge … (2011)
Severe behavioural deficits in psychiatric diseases such as autism and schizophrenia have been hypothesized to arise from elevations in the cellular balance of excitation and inhibition (E/I balance) within neural microcircuitry. This hypothesis could unify diverse streams of pathophysiological and genetic evidence, but has not been susceptible to direct testing. Here we design and use several novel optogenetic tools to causally investigate the cellular E/I balance hypothesis in freely moving mammals, and explore the associated circuit physiology. Elevation, but not reduction, of cellular E/I balance within the mouse medial prefrontal cortex was found to elicit a profound impairment in cellular information processing, associated with specific behavioural impairments and increased high-frequency power in the 30-80 Hz range, which have both been observed in clinical conditions in humans. Consistent with the E/I balance hypothesis, compensatory elevation of inhibitory cell excitability partially rescued social deficits caused by E/I balance elevation. These results provide support for the elevated cellular E/I balance hypothesis of severe neuropsychiatric disease-related symptoms.

Pain and emotion interactions in subregions of the cingulate gyrus.

Brent Vogt (2005)
Acute pain and emotion are processed in two forebrain networks, and the cingulate cortex is involved in both. Although Brodmann's cingulate gyrus had two divisions and was not based on any functional criteria, functional imaging studies still use this model. However, recent cytoarchitectural studies of the cingulate gyrus support a four-region model, with subregions, that is based on connections and qualitatively unique functions. Although the activity evoked by pain and emotion has been widely reported, some view them as emergent products of the brain rather than of small aggregates of neurons. Here, we assess pain and emotion in each cingulate subregion, and assess whether pain is co-localized with negative affect. Amazingly, these activation patterns do not simply overlap.

A putative flip-flop switch for control of REM sleep.

Jun Lu,  Clifford B. Saper,  Marshall Devor … (2006)
Rapid eye movement (REM) sleep consists of a dreaming state in which there is activation of the cortical and hippocampal electroencephalogram (EEG), rapid eye movements, and loss of muscle tone. Although REM sleep was discovered more than 50 years ago, the neuronal circuits responsible for switching between REM and non-REM (NREM) sleep remain poorly understood. Here we propose a brainstem flip-flop switch, consisting of mutually inhibitory REM-off and REM-on areas in the mesopontine tegmentum. Each side contains GABA (gamma-aminobutyric acid)-ergic neurons that heavily innervate the other. The REM-on area also contains two populations of glutamatergic neurons. One set projects to the basal forebrain and regulates EEG components of REM sleep, whereas the other projects to the medulla and spinal cord and regulates atonia during REM sleep. The mutually inhibitory interactions of the REM-on and REM-off areas may form a flip-flop switch that sharpens state transitions and makes them vulnerable to sudden, unwanted transitions-for example, in narcolepsy.