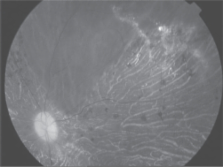 We have identified 3 patients who have some typical clinical features of Coats-like retinitis pigmentosa; peripheral serous retinal detachment, telangiectasia, prominent lipid deposition, pigmentary changes in peripheral retina, and loss of vision. None of the three patients had positive family history. All of the patients have had symptoms of nyctalopia, decreased central vision, and two of them have had constriction of visual field. All of the patients have had cataracts and two of them underwent cataract surgery. Fundus examination and fluorescein angiography of patients revealed typical retinitis pigmentosa with Coats-type changes in bilateral inferiotemporal quadrants.

A better understanding of clinical features and genetic etiology of Coats-type retinitis pigmentosa will aid diagnosis and development of new therapies. If sufficient conditions arise, genetic factors that influence the expression of CRB1 mutations in Coats-like retinitis pigmentosa should be detected.

Leber congenital amaurosis and retinitis pigmentosa with Coats-like exudative vasculopathy are associated with mutations in the crumbs homologue 1 (CRB1) gene.

I. Heredia-de La Cruz,  B Wissinger,  E Sylla … (2001)
Mutations in the crumbs homologue 1 (CRB1) gene cause a specific form of retinitis pigmentosa (RP) that is designated "RP12" and is characterized by a preserved para-arteriolar retinal pigment epithelium (PPRPE) and by severe loss of vision at age <20 years. Because of the early onset of disease in patients who have RP with PPRPE, we considered CRB1 to be a good candidate gene for Leber congenital amaurosis (LCA). Mutations were detected in 7 (13%) of 52 patients with LCA from the Netherlands, Germany, and the United States. In addition, CRB1 mutations were detected in five of nine patients who had RP with Coats-like exudative vasculopathy, a relatively rare complication of RP that may progress to partial or total retinal detachment. Given that four of five patients had developed the complication in one eye and that not all siblings with RP have the complication, CRB1 mutations should be considered an important risk factor for the Coats-like reaction, although its development may require additional genetic or environmental factors. Although no clear-cut genotype-phenotype correlation could be established, patients with LCA, which is the most severe retinal dystrophy, carry null alleles more frequently than do patients with RP. Our findings suggest that CRB1 mutations are a frequent cause of LCA and are strongly associated with the development of Coats-like exudative vasculopathy in patients with RP.

John R. Pruett (1982)
This thesis presents the results of a study of 384 eyes of 192 patients with a mean age of 39.1 years who presented with typical retinitis pigmentosa. The major findings are outlined below, together with suggested hypotheses: Cataract was found in 46.4% of the eyes. Among these, 93.6% showed posterior subcapsular opacification. The incidence of cataract increased with age. The vitreous degeneration that is characteristic of the RP syndrome and begins in childhood was described as showing dust-like, particulate matter throughout the gel; posterior vitreous separation; formation of a posterior matrix of coarse, white, interconnected strands and opacities; and final collapse of the residual gel. Ultrastructural studies of vitreous material from eight eyes revealed that the particles were isolated pigment granules and the coarse strands were composed of condensed collagen fibers. Notwithstanding the vitreous degeneration and prevalence of myopia in RP, neurosensory retinal breaks and/or rhegmatogenous detachment were found in only 7 (1.8%) of the 384 eyes studied. Premature separation of the vitreous from the retina, absence of lattice retinal degeneration, and perhaps a stronger than normal RPE-neurosensory retinal bond are thought to be possible protective factors. Rather than searching for a "toxin," elaborated by diseased retina, that causes vitreous degeneration and cataract formation, it is suggested that the ocular media be studied for an absence of moieties that are normally produced by healthy retina for vitreous and lens maintenance. The classic criteria for diagnosis of RP were met by 96.3% of eyes that showed retinal vascular attenuation and by 52.0% that showed pallor of the optic disc. Less frequent manifestations included solitary retinal hemorrhage, peripheral microaneurysms, telangiectasia, and fluorescein leakage at the macula and disc. Seven additional cases with a Coats'-like retinal detachment were added to the 14 already presented in the literature. Two of the seven had autosomal dominant RP, the first such cases reported. The vascular malformations and detachments were most often inferior. Unlike typical Coats' syndrome, the condition was usually bilateral, showed no sex preference, and appeared to affect older individuals.(ABSTRACT TRUNCATED AT 400 WORDS)

Expression of a mutant opsin gene increases the susceptibility of the retina to light damage.

M. Wang,  T Lam,  M O Tso … (2015)
The question of whether the expression of mutant opsin predisposes the retina to light damage was addressed using transgenic mice that express rhodopsin with three point mutations near the N-terminus of the molecule. The mutations involve the substitution of histidine for proline at position 23 (P23H), glycine for valine at position 20 (V20G), and leucine for proline at position 27 (P27L). These mice express equal amounts of mutant and wild-type transcripts, and develop a progressive photoreceptor degeneration that is similar to that seen in human retinitis pigmentosa (RP). The P23H mutation is associated with the most frequently occurring form of human autosomal dominant retinitis pigmentosa (ADRP) in the United States. Transgenic and normal littermates were exposed to illuminance of 300 foot-candles (ft-c) for 24 h, then placed in darkness for either 6 h, 6 days, or 14 days. Histological and biochemical techniques were used to evaluate the outer retina in light-exposed and control animals reared on 12-h light/12-h dark cycle. The results indicate that light exposure accelerates the pathological changes associated with the transgene expression. Compared with transgenic animals reared in ambient cyclic light, retinas from light-exposed mice had a reduced rhodopsin content, fewer photoreceptor cell bodies, and less preservation of retinal structure. Data obtained from normal mice did not differ for the lighting regimens used. These findings suggest that the expression of VPP mutations in the opsin gene predisposes the transgenic photoreceptors to be more susceptible to light damage. The data also suggest that reducing photic exposure may be beneficial to any patient with RP mediated by an opsin mutation.