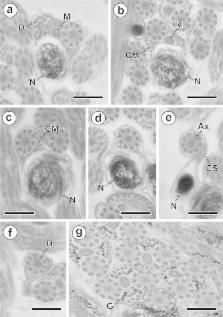 The spermatological characteristics of Collyricloides massanae (Digenea: Collyriclidae), a parasite of Apodemus sylvaticus caught in France, were studied by means of transmission electron microscopy. The mature sperm of C. massanae presents two axonemes of different lengths with the 9 + “1” pattern of the Trepaxonemata, two bundles of parallel cortical microtubules, external ornamentation of the plasma membrane, spine-like bodies, one mitochondrion, a nucleus and granules of glycogen. An analysis of spermatological organisation emphasised some differences between the mature spermatozoon of C. massanae and those reported in the Gorgoderoidea species studied to date, specially belonging to the families Dicrocoeliidae, Paragonimidae and Troglotrematidae. The ultrastructural criteria described in C. massanae such as the morphology of both anterior and posterior spermatozoon extremities, the association “external ornamentation + cortical microtubules”, the type 2 of external ornamentation and the spine-like bodies would allow us to bring closer the Collyriclidae to Microphalloidea. However, further ultrastructural and molecular studies are needed particularly in the unexplored taxa in order to fully resolve the phylogenetic position of the Collyriclidae.

Shigehiko Uni,  Odile Bain,  Hiromi Fujita … (2013)
Hard ticks taken from the Japanese serow, Capricornis crispus, in Yamagata Prefecture, Honshu, harboured infective larvae of onchocercid filariae after incubation from the 22nd to the 158th day. Haemaphysalis flava and H. japonica contained one to eight filarial larvae; females, males and a nymph of the ticks were infected. The 44 infective larvae recovered were 612–1,370 μm long, and 11 of them, 930–1,340 μm long, were studied in detail. The larvae possessed the morphologic characteristics of the larvae of the genus Cercopithifilaria, namely an oesophagus with a posterior glandular part, no buccal capsule and a long tail with three terminal lappets. Five types (A to E) of infective larvae were identified based on the morphologic characteristics. While to date five species of Cercopithifilaria have been described from the Japanese serow, a specific identification of the larvae found in this study was generally not possible. Only type E larvae could be tentatively assigned to Cercopithifilaria tumidicervicata, as they had a cervical swelling similar to that of the adults of this species. A key for the identification of the five larval types is presented. The study presents circumstantial evidences indicating that H. flava and H. japonica may transmit Cercopithifilaria spp. to Japanese serows. It also suggests the possibility that such filarial larvae will be found in hard ticks anywhere, because Cercopithifilaria is distributed worldwide, though this genus generally goes unnoticed, as its microfilariae occur in the skin, not in the blood, of host animals.

Tomáš Scholz,  Jordi Miquel,  Susan Oros … (2010)
New data on spermiogenesis and the ultrastructure of spermatozoa of 'true' tapeworms (Eucestoda) are summarized. Since 2001, more than 50 species belonging to most orders of the Eucestoda have been studied or reinvestigated, particularly members of the Caryophyllidea, Spathebothriidea, Diphyllobothriidea, Bothriocephalidea, Trypanorhyncha, Tetraphyllidea, Proteocephalidea, and Cyclophyllidea. A new classification of spermatozoa of eucestodes into seven basic types is proposed and a key to their identification is given. For the first time, a phylogenetic tree inferred from spermatological characters is provided. New information obtained in the last decade has made it possible to fill numerous gaps in the character data matrix, enabling us to carry out a more reliable analysis of the evolution of ultrastructural characters of sperm and spermiogenesis in eucestodes. The tree is broadly congruent with those based on morphological and molecular data, indicating that convergent evolution of sperm characters in cestodes may not be as common as in other invertebrate taxa. The main gaps in the current knowledge of spermatological characters are mapped and topics for future research are outlined, with special emphasis on those characters that might provide additional information about the evolution of tapeworms and their spermatozoa. Future studies should be focused on representatives of those major groups (families and orders) in which molecular data indicate paraphyly or polyphyly (e.g. 'Tetraphyllidea' and Trypanorhyncha) and on those that have a key phylogenetic position among eucestodes (e.g. Diphyllidea, 'Tetraphyllidea', Lecanicephalidea, Nippotaeniidea).