The Journal Impact Factor: Moving Toward an Alternative and Combined Scientometric Approach 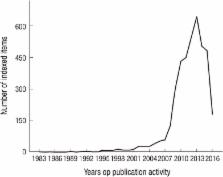 The Journal Impact Factor (JIF) is a single citation metric, which is widely employed for ranking journals and choosing target journals, but is also misused as the proxy of the quality of individual articles and academic achievements of authors. This article analyzes Scopus-based publication activity on the JIF and overviews some of the numerous misuses of the JIF, global initiatives to overcome the ‘obsession’ with impact factors, and emerging strategies to revise the concept of the scholarly impact. The growing number of articles on the JIF, most of which are in English, reflects interest of experts in journal editing and scientometrics toward its uses, misuses, and options to overcome related problems. Solely displaying values of the JIFs on the journal websites is criticized by experts as these average metrics do not reflect skewness of citation distribution of individual articles. Emerging strategies suggest to complement the JIFs with citation plots and alternative metrics, reflecting uses of individual articles in terms of downloads and distribution of related information through social media and networking platforms. It is also proposed to revise the original formula of the JIF calculation and embrace the concept of the impact and importance of individual articles. The latter is largely dependent on ethical soundness of the journal instructions, proper editing and structuring of articles, efforts to promote related information through social media, and endorsements of professional societies.

The history and meaning of the journal impact factor.

Johan Bollen, Herbert Van de Sompel, Aric Hagberg … (2009)
Background The impact of scientific publications has traditionally been expressed in terms of citation counts. However, scientific activity has moved online over the past decade. To better capture scientific impact in the digital era, a variety of new impact measures has been proposed on the basis of social network analysis and usage log data. Here we investigate how these new measures relate to each other, and how accurately and completely they express scientific impact. Methodology We performed a principal component analysis of the rankings produced by 39 existing and proposed measures of scholarly impact that were calculated on the basis of both citation and usage log data. Conclusions Our results indicate that the notion of scientific impact is a multi-dimensional construct that can not be adequately measured by any single indicator, although some measures are more suitable than others. The commonly used citation Impact Factor is not positioned at the core of this construct, but at its periphery, and should thus be used with caution.