Spotlight on lenvatinib in the treatment of thyroid cancer: patient selection and perspectives 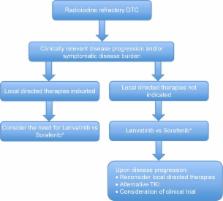 Thyroid cancer is the most common endocrine malignancy, with over 60,000 cases reported per year in the US alone. The incidence of thyroid cancer has increased in the last several years. Patients with metastatic differentiated thyroid cancer (DTC) generally have a good prognosis. Metastatic DTC can often be treated in a targeted manner with radioactive iodine, but the ability to accumulate iodine is lost with decreasing differentiation. Until recently, chemotherapy was the only treatment in patients with advanced thyroid cancer, which is no longer amenable to therapy with radioactive iodine. The modest efficacy and significant toxicity of chemotherapy necessitated the need for urgent advances in the medical field. New insights in thyroid cancer biology propelled the development of targeted therapies for this disease, including the tyrosine kinase inhibitor sorafenib as salvage treatment for DTC. In 2015, the US Food and Drug Administration approved a second tyrosine kinase inhibitor, lenvatinib, for the treatment of radioiodine-refractory thyroid cancer. Although associated with a significant progression-free survival improvement as compared to placebo in a large Phase III study (median progression-free survival 18.2 vs 3.6 months; hazard ratio 0.21; 99% confidence interval 0.14–0.31; P<0.001), the benefit of lenvatinib needs to be proved in the context of associated moderate to severe toxicities that require frequent dose reduction and delays. This article reviews the evidence supporting the use of lenvatinib as salvage therapy for radioactive iodine-refractory thyroid cancer, with a focus on the toxicity profile of this new therapy.

Barry Laird,  Jenny Tan,  Kyoko Yamaguchi … (2011)
The signaling pathway of the receptor tyrosine kinase MET and its ligand hepatocyte growth factor (HGF) is important for cell growth, survival, and motility and is functionally linked to the signaling pathway of VEGF, which is widely recognized as a key effector in angiogenesis and cancer progression. Dysregulation of the MET/VEGF axis is found in a number of human malignancies and has been associated with tumorigenesis. Cabozantinib (XL184) is a small-molecule kinase inhibitor with potent activity toward MET and VEGF receptor 2 (VEGFR2), as well as a number of other receptor tyrosine kinases that have also been implicated in tumor pathobiology, including RET, KIT, AXL, and FLT3. Treatment with cabozantinib inhibited MET and VEGFR2 phosphorylation in vitro and in tumor models in vivo and led to significant reductions in cell invasion in vitro. In mouse models, cabozantinib dramatically altered tumor pathology, resulting in decreased tumor and endothelial cell proliferation coupled with increased apoptosis and dose-dependent inhibition of tumor growth in breast, lung, and glioma tumor models. Importantly, treatment with cabozantinib did not increase lung tumor burden in an experimental model of metastasis, which has been observed with inhibitors of VEGF signaling that do not target MET. Collectively, these data suggest that cabozantinib is a promising agent for inhibiting tumor angiogenesis and metastasis in cancers with dysregulated MET and VEGFR signaling.

Thomas Crowley,  Michael Tanaka,  Shelley C. Rankin … (2008)
To assess potential differences in progression-free or overall survival when imatinib mesylate is administered to patients with incurable gastrointestinal stromal tumors (GIST) at a standard dose (400 mg daily) versus a high dose (400 mg twice daily). Patients with metastatic or surgically unresectable GIST were eligible for this phase III open-label clinical trial. At registration, patients were randomly assigned to either standard or high-dose imatinib, with close interval follow-up. If objective progression occurred by Response Evaluation Criteria in Solid Tumors, patients on the standard-dose arm could reregister to the trial and receive the high-dose imatinib regimen. Seven hundred forty-six patients with advanced GIST from 148 centers across the United States and Canada were enrolled onto this trial in 9 months. With a median follow-up of 4.5 years, median progression-free survival was 18 months for patients on the standard-dose arm, and 20 months for those receiving high-dose imatinib. Median overall survival was 55 and 51 months, respectively. There were no statistically significant differences in objective response rates, progression-free survival, or overall survival. After progression on standard-dose imatinib, 33% of patients who crossed over to the high-dose imatinib regimen achieved either an objective response or stable disease. There were more grade 3, 4, and 5 toxicities noted on the high-dose imatinib arm. This trial confirms the effectiveness of imatinib as primary systemic therapy for patients with incurable GIST but did not show any advantage to higher dose treatment. It appears reasonable to initiate therapy with 400 mg daily and to consider dose escalation on progression of disease.