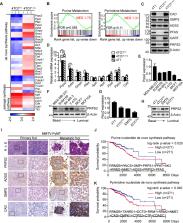 Daehwan Kim,  Ben Langmead,  Steven Salzberg (2016)
HISAT (hierarchical indexing for spliced alignment of transcripts) is a highly efficient system for aligning reads from RNA sequencing experiments. HISAT uses an indexing scheme based on the Burrows-Wheeler transform and the Ferragina-Manzini (FM) index, employing two types of indexes for alignment: a whole-genome FM index to anchor each alignment and numerous local FM indexes for very rapid extensions of these alignments. HISAT's hierarchical index for the human genome contains 48,000 local FM indexes, each representing a genomic region of ∼64,000 bp. Tests on real and simulated data sets showed that HISAT is the fastest system currently available, with equal or better accuracy than any other method. Despite its large number of indexes, HISAT requires only 4.3 gigabytes of memory. HISAT supports genomes of any size, including those larger than 4 billion bases.

Jasmine Chong,  Othman Soufan,  Carin Li … (2018)
Abstract We present a new update to MetaboAnalyst (version 4.0) for comprehensive metabolomic data analysis, interpretation, and integration with other omics data. Since the last major update in 2015, MetaboAnalyst has continued to evolve based on user feedback and technological advancements in the field. For this year's update, four new key features have been added to MetaboAnalyst 4.0, including: (1) real-time R command tracking and display coupled with the release of a companion MetaboAnalystR package; (2) a MS Peaks to Pathways module for prediction of pathway activity from untargeted mass spectral data using the mummichog algorithm; (3) a Biomarker Meta-analysis module for robust biomarker identification through the combination of multiple metabolomic datasets and (4) a Network Explorer module for integrative analysis of metabolomics, metagenomics, and/or transcriptomics data. The user interface of MetaboAnalyst 4.0 has been reengineered to provide a more modern look and feel, as well as to give more space and flexibility to introduce new functions. The underlying knowledgebases (compound libraries, metabolite sets, and metabolic pathways) have also been updated based on the latest data from the Human Metabolome Database (HMDB). A Docker image of MetaboAnalyst is also available to facilitate download and local installation of MetaboAnalyst. MetaboAnalyst 4.0 is freely available at http://metaboanalyst.ca.