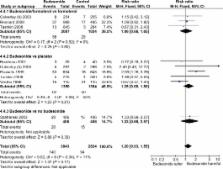 The benefit harm profile of inhaled corticosteroids, and their effect on patient oriented outcomes and comorbid pneumonia, osteoporosis and cardiovascular disease in patients with chronic obstructive pulmonary disease remain uncertain.

An overview of the evidence on the risks and benefits of inhaled corticosteroids (fluticasone and budesonide) in chronic obstructive pulmonary disease from recent randomized controlled trials and systematic reviews. Observational studies on adverse effects were also evaluated.

Evidence from recent meta-analysis suggests a modest benefit from inhaled corticosteroid long-acting beta-agonist combination inhalers on the frequency of exacerbations, (rate ratio [RR], 0.82; 95% confidence interval [CI]: 0.78 to 0.88), in improvements in quality of life measures, and forced expiratory volume in one second when compared to long-acting beta-agonists alone. On the outcome of pneumonia, our updated meta-analysis of trials (n = 24 trials; RR, 1.56; 95% CI: 1.40–1.74, P < 0.0001) and observational studies (n = 4 studies; RR, 1.44; 95% CI: 1.20–1.75, P = 0.0001) shows a significant increase in the risk of pneumonia with the inhaled corticosteroids currently available (fluticasone and budesonide). Evidence for any intraclass differences in the risk of pneumonia between currently available formulations is inconclusive due to the absence of head to head trials. Inhaled corticosteroids have no cardiovascular effects.

Among patients with chronic obstructive pulmonary disease, clinicians should carefully balance these long-term risks of inhaled corticosteroid against their symptomatic benefits.

K. Anderson,  Simon P. Jones,  P Burge … (2000)
To determine the effect of long term inhaled corticosteroids on lung function, exacerbations, and health status in patients with moderate to severe chronic obstructive pulmonary disease. Double blind, placebo controlled study. Eighteen UK hospitals. 751 men and women aged between 40 and 75 years with mean forced expiratory volume in one second (FEV(1)) 50% of predicted normal. Inhaled fluticasone propionate 500 microgram twice daily from a metered dose inhaler or identical placebo. Efficacy measures: rate of decline in FEV(1) after the bronchodilator and in health status, frequency of exacerbations, respiratory withdrawals. Safety measures: morning serum cortisol concentration, incidence of adverse events. There was no significant difference in the annual rate of decline in FEV(1 )(P=0.16). Mean FEV(1) after bronchodilator remained significantly higher throughout the study with fluticasone propionate compared with placebo (P<0.001). Median exacerbation rate was reduced by 25% from 1.32 a year on placebo to 0.99 a year on with fluticasone propionate (P=0.026). Health status deteriorated by 3.2 units a year on placebo and 2.0 units a year on fluticasone propionate (P=0.0043). Withdrawals because of respiratory disease not related to malignancy were higher in the placebo group (25% v 19%, P=0.034). Fluticasone propionate 500 microgram twice daily did not affect the rate of decline in FEV(1) but did produce a small increase in FEV(1). Patients on fluticasone propionate had fewer exacerbations and a slower decline in health status. These improvements in clinical outcomes support the use of this treatment in patients with moderate to severe chronic obstructive pulmonary disease.

Lianne Postma,  L Laitinen,  S Ohlsson … (1999)
Although patients with chronic obstructive pulmonary disease (COPD) should stop smoking, some do not. In a double-blind, placebo-controlled study, we evaluated the effect of the inhaled glucocorticoid budesonide in patients with mild COPD who continued smoking. After a six-month run-in period, we randomly assigned 1277 subjects (mean age, 52 years; mean forced expiratory volume in one second [FEV1], 77 percent of the predicted value; 73 percent men) to twice-daily treatment with 400 microg of budesonide or placebo, inhaled from a dry-powder inhaler, for three years. Of the 1277 subjects, 912 (71 percent) completed the study. Among these subjects, the median decline in the FEV1 after the use of a bronchodilator over the three-year period was 140 ml in the budesonide group and 180 ml in the placebo group (P=0.05), or 4.3 percent and 5.3 percent of the predicted value, respectively. During the first six months of the study, the FEV1 improved at the rate of 17 ml per year in the budesonide group, as compared with a decline of 81 ml per year in the placebo group (P<0.001). From nine months to the end of treatment, the FEV1 declined at similar rates in the two groups (P=0.39). Ten percent of the subjects in the budesonide group and 4 percent of those in the placebo group had skin bruising (P<0.001). Newly diagnosed hypertension, bone fractures, postcapsular cataracts, myopathy, and diabetes occurred in less than 5 percent of the subjects, and the diagnoses were equally distributed between the groups. In patients with mild COPD who continue smoking, the use of inhaled budesonide is associated with a small one-time improvement in lung function but does not appreciably affect the long-term progressive decline.

K. Anderson,  C Crim,  Edmund C Jenkins … (2009)
Inhaled corticosteroids (ICS) are important in reducing exacerbation frequency associated with chronic obstructive pulmonary disease (COPD). However, little is known about the risk of associated infections. In a post hoc analysis of the TOwards a Revolution in COPD Health (TORCH) study, we analysed and identified potential risk factors for adverse event reports of pneumonia in this randomised, double-blind trial comparing twice-daily inhaled salmeterol (SAL) 50 microg, fluticasone propionate (FP) 500 microg, and the combination (SFC) with placebo in 6,184 patients with moderate-to-severe COPD over 3 yrs. Despite a higher withdrawal rate in the placebo arm, after adjusting for time on treatment, a greater rate of pneumonia was reported in the FP and SFC treatment arms (84 and 88 per 1,000 treatment-yrs, respectively) compared with SAL and placebo (52 and 52 per 1,000 treatment-yrs, respectively). Risk factors for pneumonia were age > or =55 yrs, forced expiratory volume in 1 s <50% predicted, COPD exacerbations in the year prior to the study, worse Medical Research Council dyspnoea scores and body mass index <25 kg.m(-2). No increase in pneumonia deaths with SFC was observed; this could not be concluded for FP. Despite the benefits of ICS-containing regimens in COPD management, healthcare providers should remain vigilant regarding the possible development of pneumonia as a complication in COPD patients receiving such therapies.