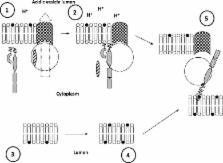 Although Crohn’s disease (CD) etiology remains unclear, a growing body of evidence suggests that CD may include an infectious component, with Mycobacterium avium subsp. paratuberculosis (MAP) being the most likely candidate for this role. However, the molecular mechanism of the MAP involvement in CD pathogenesis remains unclear. The polymorphism of the NOD2 gene, coding for an intracellular pattern recognition receptor, is a factor of predisposition to mycobacterial infections and CD. Recent findings on NOD2 interactions and functions provide the missing pieces in the puzzle of a NOD2-mediated mechanism common for mycobacterial infections and CD. Implications of these new findings for the development of a better understanding and treatments of CD and mycobacterial infections are discussed.

S Almer,  S Lesage,  J Hugot … (2001)
Crohn's disease and ulcerative colitis, the two main types of chronic inflammatory bowel disease, are multifactorial conditions of unknown aetiology. A susceptibility locus for Crohn's disease has been mapped to chromosome 16. Here we have used a positional-cloning strategy, based on linkage analysis followed by linkage disequilibrium mapping, to identify three independent associations for Crohn's disease: a frameshift variant and two missense variants of NOD2, encoding a member of the Apaf-1/Ced-4 superfamily of apoptosis regulators that is expressed in monocytes. These NOD2 variants alter the structure of either the leucine-rich repeat domain of the protein or the adjacent region. NOD2 activates nuclear factor NF-kB; this activating function is regulated by the carboxy-terminal leucine-rich repeat domain, which has an inhibitory role and also acts as an intracellular receptor for components of microbial pathogens. These observations suggest that the NOD2 gene product confers susceptibility to Crohn's disease by altering the recognition of these components and/or by over-activating NF-kB in monocytes, thus documenting a molecular model for the pathogenic mechanism of Crohn's disease that can now be further investigated.

Hua Liu,  Xian-bo Zuo,  Hai Yang … (2009)
The narrow host range of Mycobacterium leprae and the fact that it is refractory to growth in culture has limited research on and the biologic understanding of leprosy. Host genetic factors are thought to influence susceptibility to infection as well as disease progression. We performed a two-stage genomewide association study by genotyping 706 patients and 1225 controls using the Human610-Quad BeadChip (Illumina). We then tested three independent replication sets for an association between the presence of leprosy and 93 single-nucleotide polymorphisms (SNPs) that were most strongly associated with the disease in the genomewide association study. Together, these replication sets comprised 3254 patients and 5955 controls. We also carried out tests of heterogeneity of the associations (or lack thereof) between these 93 SNPs and disease, stratified according to clinical subtype (multibacillary vs. paucibacillary). We observed a significant association (P<1.00x10(-10)) between SNPs in the genes CCDC122, C13orf31, NOD2, TNFSF15, HLA-DR, and RIPK2 and a trend toward an association (P=5.10x10(-5)) with a SNP in LRRK2. The associations between the SNPs in C13orf31, LRRK2, NOD2, and RIPK2 and multibacillary leprosy were stronger than the associations between these SNPs and paucibacillary leprosy. Variants of genes in the NOD2-mediated signaling pathway (which regulates the innate immune response) are associated with susceptibility to infection with M. leprae. 2009 Massachusetts Medical Society

R Häfner,  S Manouvrier,  M Rybojad … (2001)
We have identified three missense mutations in the nucleotide-binding domain (NBD) of CARD15/NOD2 in four French and German families with Blau syndrome. Our findings indicate that, in addition to Crohn disease, CARD15 is involved in the susceptibility to a second granulomatous disorder.