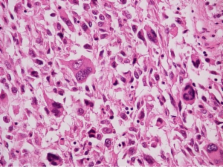 The location of osteosarcoma in the metaphysis as well as the age of the patients during the most rapid tumour growth suggest that factors related to skeletal growth are involved in the pathogenesis of this tumour. In this aspect this study aims to detect somatostatin receptors in human osteosarcomas and correlate this finding with the clinical outcome of the tumour.

Immunohistochemical staining for the presence of somatostatin receptors as well as overall survival and disease free survival rates were retrospectively studied in twenty-nine osteosarcoma patients.

A system of staging musculoskeletal neoplasms.

W F Enneking (1986)
A system for staging benign and malignant musculoskeletal lesions is presented. This system, first devised at the University of Florida in 1977, was based on data assembled from 1968 through 1976. It was field tested by the Musculoskeletal Tumor Society and published in Clinical Orthopaedics and Related Research in 1980. In the ensuing five years, the system has undergone refinement. It has recently been adapted by the American Joint Committee Task Force on Bone Tumors and proposed by them to the International Union Against Cancer (IUCC) for international usage. Based upon histologic grade (G), anatomic site (T), and presence or absence of metastases (M), it describes the progressive stages, irrespective of histogenesis, that assess the progressive degrees of risk to which the patient is subject. This system articulates well with current radiologic techniques of staging and serves as a useful guide in the selection of an appropriate definitive surgical procedure. Its usage permits comparative end result studies on the effect of surgical and nonsurgical methods of management.

Silvia Longhi,  C Forni,  S. Ferrari … (2000)
To provide an estimate of long-term prognosis for patients with osteosarcoma of the extremity treated in a single institution with neoadjuvant chemotherapy and observed for at least 10 years. Patients with nonmetastatic osteosarcoma of the extremity were preoperatively treated with high-dose methotrexate, cisplatin, and doxorubicin (ADM). Postoperatively, good responders (90% or more tumor necrosis) received the same three drugs used before surgery, whereas poor responders (less than 90% tumor necrosis) received ifosfamide and etoposide in addition to those three drugs. For the 164 patients who entered the study between September 1986 and December 1989, surgery was a limb salvage in 136 cases (82%) and a good histologic response was observed in 117 patients (71%). At a follow-up ranging from 10 to 13 years (median, 11.5 years), 101 patients (61%) remained continuously free of disease, 61 relapsed, and two died of ADM-induced cardiotoxicity. There were no differences in prognosis between good and poor responding patients. ADM-induced cardiotoxicity (six patients), male infertility (10 of the 12 assessable patients), and second malignancies (seven patients) were the major complications of chemotherapy. Despite the large number of limb salvages performed, only four local recurrences (2.4%) were registered. With an aggressive neoadjuvant chemotherapy, it is possible to cure more than 60% of patients with nonmetastatic osteosarcoma of the extremity and amputation may be avoided in more than 80% of them. Because local or systemic relapses, myocardiopathies, and second malignancies are possible even 5 years or more after the beginning of treatment, a long-term follow-up is recommended for these patients.