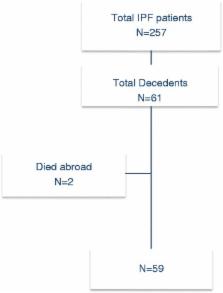 Idiopathic pulmonary fibrosis (IPF) is a progressive disease with median survival from 2 to 7 years. Palliative care is an important part of patients´ care as lung transplantation is not an option for the majority of patients. The aim of this study was to describe treatment practices, decision-making and symptoms during end-of-life care of IPF patients.

We identified 59 deceased patients from a national prospective IPF cohort study (FinnishIPF) and analyzed retrospectively their health care documentation during the 6 months that preceded death.

During the final hospital stay, antibiotics were given to 79 % and non-invasive ventilation to 36 % of patients. During the last 24 h of life, radiologic imaging or laboratory tests were taken in 19 % and 53 % of the hospitalized patients, respectively. These tests and life prolonging therapies were more common in tertiary hospitals compared to other places of death. Dyspnea (66 %) and pain (31 %) were the most common symptoms recorded. Opioids were prescribed to 71 % of the patients during the last week before death.

The majority of IPF patients died in a hospital with ongoing life-prolonging procedures until death. The frequent use of opioids is an indicator of an intention to relieve symptoms, but end-of-life decisions were still made very late. Early integrated palliative care with advance care plan could improve the end-of-life care of dying IPF patients.

David Currow, B Fazekas, Chuong Bui … (2003)
To determine the efficacy of oral morphine in relieving the sensation of breathlessness in patients in whom the underlying aetiology is maximally treated. Randomised, double blind, placebo controlled crossover study. Four outpatient clinics at a hospital in South Australia. 48 participants who had not previously been treated with opioids (mean age 76, SD 5) with predominantly chronic obstructive pulmonary disease (42, 88%) were randomised to four days of 20 mg oral morphine with sustained release followed by four days of identically formulated placebo, or vice versa. Laxatives were provided as needed. Dyspnoea in the morning and evening as shown on a 100 mm visual analogue scale, quality of sleep, wellbeing, performance on physical exertion, and side effects as measured at the end of the four day treatment period. 38 participants completed the study; three withdrew because of definite and two because of possible side effects of morphine (nausea, vomiting, and sedation). Participants reported significantly different dyspnoea scores when treated with morphine: an improvement of 6.6 mm (95% confidence interval 1.6 mm to 11.6 mm) in the morning and of 9.5 mm (3.0 mm to 16.1 mm) in the evening (P = 0.011 and P = 0.006, respectively). During the period in which they were taking morphine participants also reported better sleep (P = 0.039). More participants reported distressing constipation while taking morphine (9 v 1, P = 0.021) in spite of using laxatives. All other side effects were not significantly worse with morphine, although the study was not powered to address side effects. Sustained release, oral morphine at low dosage provides significant symptomatic improvement in refractory dyspnoea in the community setting.

David Currow, Christine V. McDonald, Sheila Oaten … (2011)
Randomized controlled trials can answer questions of efficacy, but long-term pharmacovigilance studies generate complementary safety data. Level I evidence supports short-term efficacy of opioids in reducing chronic refractory dyspnea. This study aimed to determine the minimum effective once-daily dose of sustained-release morphine, and whether net clinical benefits are sustained safely. In a Phase II dose increment study, 10mg daily of sustained-release morphine was administered, and increased in nonresponders by 10mg daily each week to a maximum of 30 mg daily. The participant was withdrawn if there were unacceptable side effects or no response to maximum dose. If participants had a 10% improvement in dyspnea over their own baseline, they joined a long-term Phase IV effectiveness/safety study at that dose. Complying with Strengthening the Reporting of Observational Studies in Epidemiology (STROBE) guidelines, response and side effects are described, with demographic and clinical characteristics of responders. Eighty-three participants (53 males, mean age 75 years, 54% with chronic obstructive pulmonary disease) provided more than 30 patient-years of data. Fifty-two participants derived ≥ 10% benefit (on average 35% improvement over baseline), giving a response rate of 62% (number needed to treat of 1.6: number needed to harm 4.6); for 70%, this dose was 10mg/24h. Benefit was maintained at three months for 28 (33%) people. Ranking of breathlessness was reduced significantly (P<0.001), but constipation increased (P<0.001) despite laxatives. There were no episodes of respiratory depression or hospitalizations as a result of the sustained-release morphine. Overall, one in three people continued to derive benefit at three months. Ten milligrams of sustained-release oral morphine once daily is safe and effective for most people who respond. Copyright © 2011 U.S. Cancer Pain Relief Committee. Published by Elsevier Inc. All rights reserved.

Sabrina Bajwah, Irene J Higginson, Joy R Ross … (2013)
While there have been some studies looking at the impact on quality of life of patients with idiopathic pulmonary fibrosis, to date no qualitative research looking at the specialist palliative needs of these patients has been conducted.