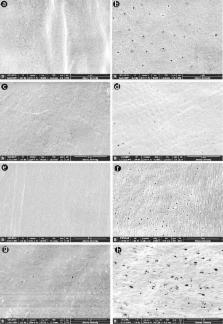 In this study, we used Fourier transform infrared spectroscopy (FT-IR), elemental analysis (EA), thermogravimetric analysis (TGA), X-ray diffractometry (XRD), and scanning electron microscopy (SEM) to investigate chitin structure isolated from both sexes of four grasshopper species. FT-IR, EA, XRD, and TGA showed that the chitin was in the alpha form. With respect to gender, two main differences were observed. First, we observed that the quantity of chitin was greater in males than in females and the dry weight of chitin between species ranged from 4.71% to 11.84%. Second, using SEM, we observed that the male chitin surface structure contained 25 – 90nm wide nanofibers and 90 – 250 nm nanopores, while no pores or nanofibers were observed in the chitin surface structure of the majority of females (nanofibers were observed only in M. desertus females). In contrast, the elemental analysis, thermal properties, and crystalline index values for chitin were similar in males and females. Also, we carried out enzymatic digestion of the isolated chitins using commercial chitinase from Streptomyces griseus. We observed that there were no big differences in digestion rate of the chitins from both sexes and commercial chitin. The digestion rates were for grasshoppers’ chitins; 88.45–95.48% and for commercial chitin; 94.95%.

Production, properties, and some new applications of chitin and its derivatives.

Hussein A N Al-Wadei,  Józef Synowiecki (2002)
Chitin is a polysaccharide composed from N-acetyl-D-glucosamine units. It is the second most abundant biopolymer on Earth and found mainly in invertebrates, insects, marine diatoms, algae, fungi, and yeasts. Recent investigations confirm the suitability of chitin and its derivatives in chemistry, biotechnology, medicine, veterinary, dentistry, agriculture, food processing, environmental protection, and textile production. The development of technologies based on the utilization of chitin derivatives is caused by their polyelectrolite properties, the presence of reactive functional groups, gel-forming ability, high adsorption capacity, biodegradability and bacteriostatic, and fungistatic and antitumour influence. Resources of chitin for industrial processing are crustacean shells and fungal mycelia. Fungi contain also chitosan, the product of N-deacetylation of chitin. Traditionally, chitin is isolated from crustacean shells by demineralization with diluted acid and deproteinization in a hot base solution. Furthermore, chitin is converted to chitosan by deacetylation in concentrated NaOH solution. It causes changes in molecular weight and a degree of deacetylation of the product and degradation of nutritionally valuable proteins. Thus, enzymatic procedures for deproteinization of the shells or mold mycelia and for chitin deacetylation were investigated. These studies show that chitin is resistant to enzymatic deacetylation. However, chitin deacetylated partially by chemical treatment can be processed further by deacetylase. Efficiency of enzymatic deproteinization depends on the source of crustacean offal and the process conditions. Mild enzymatic treatment removes about 90% of the protein and carotenoids from shrimp-processing waste, and the carotenoprotein produced is useful for feed supplementation. In contrast, deproteinization of shrimp shells by Alcalase led to the isolation of chitin containing about 4.5% of protein impurities and recovery of protein hydrolysate.

Extraction and Characterization of Chitin from the Beetle Holotrichia parallela Motschulsky

Shaofang Liu,  Jie Sun,  Lina Yu … (2012)
Insect chitin was isolated from adult Holotrichia parallela by treatment with 1 M HCl and 1 M NaOH, following by 1% potassium permanganate solution for decolorization. The yield of chitin from this species is 15%. This insect chitin was compared with the commercial α-chitin from shrimp, by infrared spectroscopy, X-ray diffraction, scanning electron microscopy, and elemental analysis. Both chitins exhibited similar chemical structures and physicochemical properties. Adult H. parallela is thus a promising alternative source of chitin.