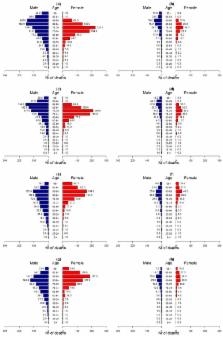 Extreme temperatures impose thermal stress on human health, resulting in increased hospitalizations and mortality rate. We investigated the circulatory and respiratory causes of death for the years 2007 to 2014 inclusive for the urban and rural areas of Nicosia, Cyprus under urban heatwave and non-heatwave conditions. Heatwaves were defined as four or more consecutive days with mean urban daily temperature over the 90th percentile threshold temperature of the eight investigated years. Lag period of adverse health effects was found to be up to three days following the occurrence of high temperatures. The relative risk (RR) for mortality rate under heatwave and non-heatwave conditions was found taking in consideration the lag period. The results showed the increase of mortality risk particularly for men of ages 65–69 (RR = 2.38) and women of ages 65–74 (around RR = 2.54) in the urban area, showing that women were more vulnerable to heat extremities. High temperatures were also associated with high ozone concentrations, but they did not impose an excess risk factor, as they did not reach extreme values. This analysis highlights the importance of preparing for potential heat related health impacts even in Cyprus, which is an island with frequent heatwaves.

Ivan Anderson,  Karen Bell (2009)
Many studies have linked weather to mortality; however, role of such critical factors as regional variation, susceptible populations, and acclimatization remain unresolved. We applied time-series models to 107 US communities allowing a nonlinear relationship between temperature and mortality by using a 14-year dataset. Second-stage analysis was used to relate cold, heat, and heat wave effect estimates to community-specific variables. We considered exposure timeframe, susceptibility, age, cause of death, and confounding from pollutants. Heat waves were modeled with varying intensity and duration. Heat-related mortality was most associated with a shorter lag (average of same day and previous day), with an overall increase of 3.0% (95% posterior interval: 2.4%-3.6%) in mortality risk comparing the 99th and 90th percentile temperatures for the community. Cold-related mortality was most associated with a longer lag (average of current day up to 25 days previous), with a 4.2% (3.2%-5.3%) increase in risk comparing the first and 10th percentile temperatures for the community. Mortality risk increased with the intensity or duration of heat waves. Spatial heterogeneity in effects indicates that weather-mortality relationships from 1 community may not be applicable in another. Larger spatial heterogeneity for absolute temperature estimates (comparing risk at specific temperatures) than for relative temperature estimates (comparing risk at community-specific temperature percentiles) provides evidence for acclimatization. We identified susceptibility based on age, socioeconomic conditions, urbanicity, and central air conditioning. Acclimatization, individual susceptibility, and community characteristics all affect heat-related effects on mortality.

A decade of weather extremes