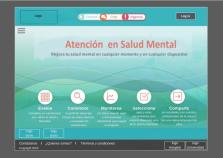 Health information technologies (HITs) hold enormous promise for improving access to and providing better quality of mental health care. However, despite the spread of such technologies in high-income countries, these technologies have not yet been commonly adopted in low- and middle-income countries. People living in these parts of the world are at risk of experiencing physical, technological, and social health inequalities. A possible solution is to utilize the currently available HITs developed in other counties.

Using participatory design methodologies with Colombian end users (young people, their supportive others, and health professionals), this study aimed to conduct co-design workshops to culturally adapt a Web-based Mental Health eClinic (MHeC) for young people, perform one-on-one user-testing sessions to evaluate an alpha prototype of a Spanish version of the MHeC and adapt it to the Colombian context, and inform the development of a skeletal framework and alpha prototype for a Colombian version of the MHeC (MHeC-C).

This study involved the utilization of a research and development (R&D) cycle including 4 iterative phases: co-design workshops; knowledge translation; tailoring to language, culture, and place (or context); and one-on-one user-testing sessions.

A total of 2 co-design workshops were held with 18 users—young people (n=7) and health professionals (n=11). Moreover, 10 users participated in one-on-one user-testing sessions—young people (n=5), supportive others (n=2), and health professionals (n=3). A total of 204 source documents were collected and 605 annotations were coded. A thematic analysis resulted in 6 themes (ie, opinions about the MHeC-C, Colombian context, functionality, content, user interface, and technology platforms). Participants liked the idea of having an MHeC designed and adapted for Colombian young people, and its 5 key elements were acceptable in this context (home page and triage system, self-report assessment, dashboard of results, booking and video-visit system, and personalized well-being plan). However, to be relevant in Colombia, participants stressed the need to develop additional functionality (eg, phone network backup; chat; geolocation; and integration with electronic medical records, apps, or electronic tools) as well as an adaptation of the self-report assessment. Importantly, the latter not only included language but also culture and context.

The application of an R&D cycle that also included processes for adaptation to Colombia (language, culture, and context) resulted in the development of an evidence-based, language-appropriate, culturally sensitive, and context-adapted HIT that is relevant, applicable, engaging, and usable in both the short and long term. The resultant R&D cycle allowed for the adaptation of an already available HIT (ie, MHeC) to the MHeC-C—a low-cost and scalable technology solution for low- and middle-income countries like Colombia, which has the potential to provide young people with accessible, available, affordable, and integrated mental health care at the right time.

Javier Garcia-Campayo,  Enric Zamorano Bayarri,  Miguel A Ruiz-Zárate … (2010)
Background Generalized anxiety disorder (GAD) is a prevalent mental health condition which is underestimated worldwide. This study carried out the cultural adaptation into Spanish of the 7-item self-administered GAD-7 scale, which is used to identify probable patients with GAD. Methods The adaptation was performed by an expert panel using a conceptual equivalence process, including forward and backward translations in duplicate. Content validity was assessed by interrater agreement. Criteria validity was explored using ROC curve analysis, and sensitivity, specificity, predictive positive value and negative value for different cut-off values were determined. Concurrent validity was also explored using the HAM-A, HADS, and WHO-DAS-II scales. Results The study sample consisted of 212 subjects (106 patients with GAD) with a mean age of 50.38 years (SD = 16.76). Average completion time was 2'30''. No items of the scale were left blank. Floor and ceiling effects were negligible. No patients with GAD had to be assisted to fill in the questionnaire. The scale was shown to be one-dimensional through factor analysis (explained variance = 72%). A cut-off point of 10 showed adequate values of sensitivity (86.8%) and specificity (93.4%), with AUC being statistically significant [AUC = 0.957-0.985); p 0.001). Limitations Elderly people, particularly those very old, may need some help to complete the scale. Conclusion After the cultural adaptation process, a Spanish version of the GAD-7 scale was obtained. The validity of its content and the relevance and adequacy of items in the Spanish cultural context were confirmed.

Social Health Inequalities and eHealth: A Literature Review With Qualitative Synthesis of Theoretical and Empirical Studies

Karine Latulippe,  Christine Hamel,  Dominique Giroux (2017)
Background eHealth is developing rapidly and brings with it a promise to reduce social health inequalities (SHIs). Yet, it appears that it also has the potential to increase them. Objectives The general objective of this review was to set out how to ensure that eHealth contributes to reducing SHIs rather than exacerbating them. This review has three objectives: (1) identifying characteristics of people at risk of experiencing social inequality in health; (2) determining the possibilities of developing eHealth tools that avoid increasing SHI; and (3) modeling the process of using an eHealth tool by people vulnerable to SHI. Methods Following the EPPI approach (Evidence for Policy and Practice of Information of the Institute of Education at the University of London), two databases were searched for the terms SHIs and eHealth and their derivatives in titles and abstracts. Qualitative, quantitative, and mixed articles were included and evaluated. The software NVivo (QSR International) was employed to extract the data and allow for a metasynthesis of the data. Results Of the 73 articles retained, 10 were theoretical, 7 were from reviews, and 56 were based on empirical studies. Of the latter, 40 used a quantitative approach, 8 used a qualitative approach, 4 used mixed methods approach, and only 4 were based on participatory research-action approach. The digital divide in eHealth is a serious barrier and contributes greatly to SHI. Ethnicity and low income are the most commonly used characteristics to identify people at risk of SHI. The most promising actions for reducing SHI via eHealth are to aim for universal access to the tool of eHealth, become aware of users’ literacy level, create eHealth tools that respect the cultural attributes of future users, and encourage the participation of people at risk of SHI. Conclusions eHealth has the potential to widen the gulf between those at risk of SHI and the rest of the population. The widespread expansion of eHealth technologies calls for rigorous consideration of interventions, which are not likely to exacerbate SHI.

This is an open-access article distributed under the terms of the Creative Commons Attribution License ( https://creativecommons.org/licenses/by/4.0/), which permits unrestricted use, distribution, and reproduction in any medium, provided the original work, first published in JMIR Mental Health, is properly cited. The complete bibliographic information, a link to the original publication on http://mental.jmir.org/, as well as this copyright and license information must be included.