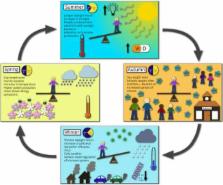 Across Europe, COPD affects 23 million people leading to annual health care costs of ~€25.1 billion. This burden is particularly severe during winter months in association with the peak incidence of exacerbation events. Seasonal variation in the health status of patients with COPD places additional and often critical pressure on already strained health care resources. COPD exacerbations are characterized by worsening day-to-day symptoms of an individual and often triggered by respiratory infections, but the process by which this occurs in a seasonal fashion is likely to be multifactorial. In this review, we discuss recent population studies that highlight the impact of seasonality in COPD and review the proposed biological mechanisms underlying this. An appraisal of the role of the host susceptibility and response, environmental triggers and the biology of respiratory pathogens is detailed. The impact of each aspect is considered, and an integrated model of the context for the whole individual and society in general is explored.

Influenza Virus Transmission Is Dependent on Relative Humidity and Temperature

A Bhowmik,  I Moric,  William G Sanderson … (2001)
The effects of respiratory viral infection on the time course of chronic obstructive pulmonary disease (COPD) exacerbation were examined by monitoring changes in systemic inflammatory markers in stable COPD and at exacerbation. Eighty-three patients with COPD (mean [SD] age, 66.6 [7.1] yr, FEV(1), 1.06 [0.61] L) recorded daily peak expiratory flow rate and any increases in respiratory symptoms. Nasal samples and blood were taken for respiratory virus detection by culture, polymerase chain reaction, and serology, and plasma fibrinogen and serum interleukin-6 (IL-6) were determined at stable baseline and exacerbation. Sixty-four percent of exacerbations were associated with a cold occurring up to 18 d before exacerbation. Seventy-seven viruses (39 [58.2%] rhinoviruses) were detected in 66 (39.2%) of 168 COPD exacerbations in 53 (64%) patients. Viral exacerbations were associated with frequent exacerbators, colds with increased dyspnea, a higher total symptom count at presentation, a longer median symptom recovery period of 13 d, and a tendency toward higher plasma fibrinogen and serum IL-6 levels. Non-respiratory syncytial virus (RSV) respiratory viruses were detected in 11 (16%), and RSV in 16 (23.5%), of 68 stable COPD patients, with RSV detection associated with higher inflammatory marker levels. Respiratory virus infections are associated with more severe and frequent exacerbations, and may cause chronic infection in COPD. Prevention and early treatment of viral infections may lead to a decreased exacerbation frequency and morbidity associated with COPD.

John T Murphy,  Nancy Evans,  Maria B. Grant … (2002)
The role of bacterial pathogens in acute exacerbations of chronic obstructive pulmonary disease is controversial. In older studies, the rates of isolation of bacterial pathogens from sputum were the same during acute exacerbations and during stable disease. However, these studies did not differentiate among strains within a bacterial species and therefore could not detect changes in strains over time. We hypothesized that the acquisition of a new strain of a pathogenic bacterial species is associated with exacerbation of chronic obstructive pulmonary disease. We conducted a prospective study in which clinical information and sputum samples for culture were collected monthly and during exacerbations from 81 outpatients with chronic obstructive pulmonary disease. Molecular typing of sputum isolates of nonencapsulated Haemophilus influenzae, Moraxella catarrhalis, Streptococcus pneumoniae, and Pseudomonas aeruginosa was performed. Over a period of 56 months, the 81 patients made a total of 1975 clinic visits, 374 of which were made during exacerbations (mean, 2.1 per patient per year). On the basis of molecular typing, an exacerbation was diagnosed at 33.0 percent of the clinic visits that involved isolation of a new strain of a bacterial pathogen, as compared with 15.4 percent of visits at which no new strain was isolated (P<0.001; relative risk of an exacerbation, 2.15; 95 percent confidence interval, 1.83 to 2.53). Isolation of a new strain of H. influenzae, M. catarrhalis, or S. pneumoniae was associated with a significantly increased risk of an exacerbation. The association between an exacerbation and the isolation of a new strain of a bacterial pathogen supports the causative role of bacteria in exacerbations of chronic obstructive pulmonary disease. Copyright 2002 Massachusetts Medical Society