Evidence of SARS-CoV-2 Infection in Returning Travelers from Wuhan, China 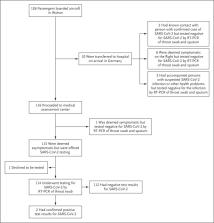 Bookmark
There is no author summary for this article yet. Authors can add summaries to their articles on ScienceOpen to make them more accessible to a non-specialist audience.
To the Editor: As the number of cases of infection with the novel coronavirus (SARS-CoV-2) has continued to increase, many countries have established restrictions regarding travelers who have recently visited China. 1 With lockdown measures imposed in Hubei Province, China, 2 and a public health emergency of international concern declared by the World Health Organization, 3 foreign nationals have sought to return to their home countries from China, and public health authorities are racing to contain the spread of Covid-19 (the disease caused by SARS-CoV-2 infection) around the world. This process is complicated by epidemiologic uncertainty regarding possible transmission of the virus by asymptomatically or subclinically symptomatic infected persons. It is unclear whether persons who show no signs or symptoms of respiratory infection shed SARS-CoV-2. In this context, a group of predominantly German nationals who had stayed in Hubei Province was evacuated to Frankfurt, Germany, on February 1, 2020. They were to be transferred to Germersheim, Germany, and quarantined for 14 days, since this period is thought to be the upper limit of the incubation period of SARS-CoV-2. Screening for symptoms and clinical signs of infection was performed before their departure from China. A total of 126 travelers were allowed to board an aircraft operated by the German air force (Figure 1). During the flight, 10 passengers were isolated. Two passengers had had contact with 1 person who had a confirmed case of SARS-CoV-2 infection, 6 had reported symptoms, were deemed to be clinically symptomatic, or both, and 2 passengers had accompanied family members who had been isolated on the flight because of suspected SARS-CoV-2 infection or because of other symptoms (i.e., symptoms related to pregnancy). These 10 passengers were transferred to University Hospital Frankfurt immediately after arrival. All 10 tested negative for SARS-CoV-2 by real-time reverse-transcription–polymerase-chain-reaction (RT-PCR) assays 4 of throat swabs and sputum. The remaining 116 passengers (5 months to 68 years of age), including 23 children, were sent to the medical assessment center at Frankfurt Airport, where each was evaluated by a medical team of physicians. Each passenger was asked to report current symptoms of fever, fatigue, sore throat, cough, runny nose, muscle aches, and diarrhea, and each one was screened for signs of infection in the nose and throat. The temperature of all passengers was taken. All were afebrile except for 1 passenger who had a temperature of 38.4°C and reported dyspnea and cough. He was transferred to University Hospital Frankfurt for evaluation. However, testing to detect SARS-CoV-2 by RT-PCR of a throat swab and sputum was negative. In addition to the preplanned multistep process of screening for signs and symptoms of infection and observing the asymptomatic cohort in quarantine, we decided to offer a throat swab to test for SARS-CoV-2 in each of the 115 travelers who had passed triage. A total of 114 passengers consented to the test. Two of the 114 persons (1.8%) in this cohort of travelers who had passed the symptoms-based screening tested positive for SARS-CoV-2 by RT-PCR (cycle threshold value in the two samples, 24.39 and 30.25, respectively). Testing with a second protocol consisting of two commercial sets (LightMix Modular SARS and Wuhan CoV E-gene, and LightMix Modular Wuhan CoV RdRP-gene, both produced by TIB MOLBIOL) and retesting of the positive samples at the Institute of Virology, Philipps University Marburg, in Marburg, Germany, confirmed the results. In addition, the isolation of SARS-CoV-2 from both samples in cell culture of Caco-2 cells indicated potential infectivity (see the Supplementary Appendix, available with the full text of this letter at NEJM.org). These two persons were subsequently isolated from the cohort and transferred to the Infectious Disease Unit at University Hospital Frankfurt for further evaluation and observation on the following day. After a thorough evaluation in the hospital ward, a faint rash and minimal pharyngitis were observed in one patient. Both patients remained well and afebrile 7 days after admission. In this effort to evacuate 126 people from Wuhan to Frankfurt, a symptom-based screening process was ineffective in detecting SARS-CoV-2 infection in 2 persons who later were found to have evidence of SARS-CoV-2 in a throat swab. We discovered that shedding of potentially infectious virus may occur in persons who have no fever and no signs or only minor signs of infection.

Victor M Corman,  Olfert Landt,  Marco Kaiser … (2020)
Background The ongoing outbreak of the recently emerged novel coronavirus (2019-nCoV) poses a challenge for public health laboratories as virus isolates are unavailable while there is growing evidence that the outbreak is more widespread than initially thought, and international spread through travellers does already occur. Aim We aimed to develop and deploy robust diagnostic methodology for use in public health laboratory settings without having virus material available. Methods Here we present a validated diagnostic workflow for 2019-nCoV, its design relying on close genetic relatedness of 2019-nCoV with SARS coronavirus, making use of synthetic nucleic acid technology. Results The workflow reliably detects 2019-nCoV, and further discriminates 2019-nCoV from SARS-CoV. Through coordination between academic and public laboratories, we confirmed assay exclusivity based on 297 original clinical specimens containing a full spectrum of human respiratory viruses. Control material is made available through European Virus Archive – Global (EVAg), a European Union infrastructure project. Conclusion The present study demonstrates the enormous response capacity achieved through coordination of academic and public laboratories in national and European research networks.