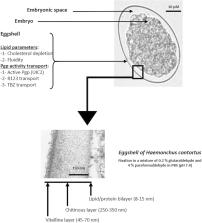 Eukaryote plasma membranes protect cells from chemical attack. Xenobiotics, taken up through passive diffusion, accumulate in the membranes, where they are captured by transporters, among which P-glycoproteins (Pgps). In nematodes such as Haemonchus contortus, eggshells and cuticles provide additional protective barriers against xenobiotics. Little is known about the role of these structures in the transport of chemical molecules. Pgps, members of the ABC transporter family, are present in eggshells and cuticles. Changes in the activity of these proteins have also been correlated with alterations in lipids, such as cholesterol content, in eggshells. However, the cellular mechanisms underlying these effects remain unclear. We show here that an experimental decrease in the cholesterol content of eggshells of Haemonchus contortus, with Methyl-beta-CycloDextrin (MβCD), results in an increase in membrane fluidity, favouring Pgp activity and leading to an increase in resistance to anthelmintics. This effect is modulated by the initial degree of anthelminthic resistance of the eggs. These results suggest that eggshell fluidity plays a major role in the modulation of Pgp activity. They confirm that Pgp activity is highly influenced by the local microenvironment, in particular sterols, as observed in some vertebrate models. Thus, eggshell barriers could play an active role in the transport of xenobiotics.

Alteration of the myometrial plasma membrane cholesterol content with beta-cyclodextrin modulates the binding affinity of the oxytocin receptor.

Effects of cholesterol depletion by cyclodextrin on the sphingolipid microdomains of the plasma membrane.

Daniel Hoessli,  S Ilangumaran (1998)
Sphingolipid microdomains are thought to result from the organization of plasma membrane sphingolipids and cholesterol into a liquid ordered phase, wherein the glycosylphosphatidylinositol (GPI)-anchored proteins are enriched. These domains, resistant to extraction by cold Triton X-100, can be isolated as buoyant membrane complexes (detergent-resistant membranes) in isopycnic density gradients. Here the effects of methyl-beta-cyclodextrin (MBCD), a specific cholesterol-binding agent that neither binds nor inserts into the plasma membrane, were investigated on the sphingolipid microdomains of lymphocytes. MBCD released substantial quantities of GPI-anchored Thy-1 and glycosphingolipid GM1, and also other surface proteins including CD45, and intracellular Lck and Fyn kinases. From endothelial cells, MBCD released GPI-anchored CD59, and CD44, but only a negligible amount of caveolin. Most MBCD-released Thy-1 and CD59 were not sedimentable and thus differed from Thy-1 released by membrane-active cholesterol-binding agents such as saponin and streptolysin O, or Triton X-100. Unlike that released by Triton X-100, only part of the Thy-1 molecules released by MBCD was buoyant in density gradients and co-isolated with GM1. Finally, treatment of Triton X-100-isolated detergent-resistant membranes with MBCD extracted most of the cholesterol without affecting the buoyant properties of Thy-1 or GM1. We suggest that (1) MBCD preferentially extracts cholesterol from outside, rather than within the sphingolipid microdomains and (2) this partly solubilizes GPI-anchored and transmembrane proteins from the glycerophospholipid-rich membrane and releases sphingolipid microdomains in both vesicular and non-vesicular form.