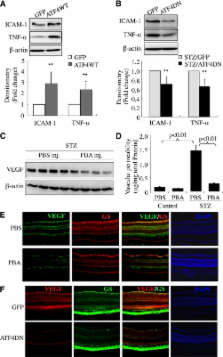 Timothy Kern (2007)
Diabetes causes metabolic and physiologic abnormalities in the retina, and these changes suggest a role for inflammation in the development of diabetic retinopathy. These changes include upregulation of iNOS, COX-2, ICAM-1, caspase 1, VEGF, and NF- κ B, increased production of nitric oxide, prostaglandin E2, IL-1 β , and cytokines, as well as increased permeability and leukostasis. Using selective pharmacologic inhibitors or genetically modified animals, an increasing number of therapeutic approaches have been identified that significantly inhibit development of at least the early stages of diabetic retinopathy, especially occlusion and degeneration of retinal capillaries. A common feature of a number of these therapies is that they inhibit production of inflammatory mediators. The concept that localized inflammatory processes play a role in the development of diabetic retinopathy is relatively new, but evidence that supports the hypothesis is accumulating rapidly. This new hypothesis offers new insight into the pathogenesis of diabetic retinopathy, and offers novel targets to inhibit the ocular disease.

Juanjuan Wang,  Xueliang Xu,  Michael Elliott … (2010)
OBJECTIVE Vascular endothelial growth factor (VEGF-A or VEGF) is a major pathogenic factor and therapeutic target for diabetic retinopathy (DR). Since VEGF has been proposed as a survival factor for retinal neurons, defining the cellular origin of pathogenic VEGF is necessary for the effectiveness and safety of long-term anti-VEGF therapies for DR. To determine the significance of Müller cell-derived VEGF in DR, we disrupted VEGF in Müller cells with an inducible Cre/lox system and examined diabetes-induced retinal inflammation and vascular leakage in these conditional VEGF knockout (KO) mice. RESEARCH DESIGN AND METHODS Leukostasis was determined by counting the number of fluorescently labeled leukocytes inside retinal vasculature. Expression of biomarkers for retinal inflammation was assessed by immunoblotting of TNF-α, ICAM-1, and NF-κB. Vascular leakage was measured by immunoblotting of retinal albumin and fluorescent microscopic analysis of extravascular albumin. Diabetes-induced vascular alterations were examined by immunoblotting and immunohistochemistry for tight junctions, and by trypsin digestion assays for acellular capillaries. Retinal integrity was analyzed with morphologic and morphometric analyses. RESULTS Diabetic conditional VEGF KO mice exhibited significantly reduced leukostasis, expression of inflammatory biomarkers, depletion of tight junction proteins, numbers of acellular capillaries, and vascular leakage compared to diabetic control mice. CONCLUSIONS Müller cell-derived VEGF plays an essential and causative role in retinal inflammation, vascular lesions, and vascular leakage in DR. Therefore, Müller cells are a primary cellular target for proinflammatory signals that mediates retinal inflammation and vascular leakage in DR.