Effectiveness of pulmonary rehabilitation in COPD with mild symptoms: a systematic review with meta-analyses 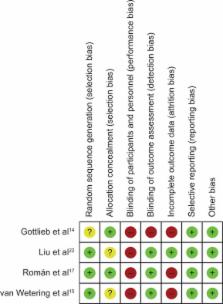 The methodology was developed as a part of evidence-based guideline development and is in accordance with the principles of the Grading of Recommendations Assessment, Development and Evaluation (GRADE) Working Group. We identified randomized controlled trials (RCTs) through a systematic, multidatabase literature search and selected RCTs comparing the effects of PR with usual care in patients with COPD and mMRC ≤1. Predefined critical outcomes were health-related quality of life (HRQoL), adverse effects and mortality, while walking distance, maximal exercise capacity, muscle strength, and dropouts were important outcomes. Two authors independently extracted data, assessed trial eligibility and risk of bias, and graded the evidence. Meta-analyses were performed when deemed feasible.

Four RCTs (489 participants) were included. On the basis of moderate-quality evidence, we found a clinically and statistically significant improvement in short-term HRQoL of 4.2 units (95% confidence interval [CI]: [−4.51 to −3.89]) on St George’s Respiratory Questionnaire, but not at the longest follow-up. We also found a statistically significant improvement of 25.71 m (95% CI: [15.76–35.65]) in the 6-minute walk test with PR; however, this improvement was not considered clinically relevant. No difference was found for mortality, and insufficient data prohibited meta-analysis for muscle strength and maximal exercise capacity. No adverse effects were reported.

Interpreting thresholds for a clinically significant change in health status in asthma and COPD.

Simon P. Jones (2002)
Health status (or Health-Related Quality of Life) measurement is an established method for assessing the overall efficacy of treatments for asthma and chronic obstructive pulmonary disease (COPD). Such measurements can indicate the potential clinical significance of a treatment's effect. This paper is concerned with methods of estimating the threshold of clinical significance for three widely used health status questionnaires for asthma and COPD: the Asthma Quality of Life Questionnaire, Chronic Respiratory Questionnaire and St George's Respiratory Questionnaire. It discusses the methodology used to obtain such estimates and shows that the estimates appear to be fairly reliable; ie. for a given questionnaire, similar estimates may be obtained in different studies. These empirically derived thresholds are all mean estimates with confidence intervals around them. The presence of these confidence intervals affects the way in which the thresholds may be used to draw inferences concerning the clinical relevance of clinical trial results. A new system of judging the magnitude of clinically significant results is proposed. Finally, an attempt is made to translate these thresholds into scenarios that illustrate what a clinically significant change with treatment may mean to an individual patient.

Donald Redelmeier,  Fatehia Bayoumi,  Thalia R. Goldstein … (1997)
Functional status measurements are often difficult to interpret because small differences may be statistically significant but not clinically significant. How much does the Six Minute Walk test (6MW) need to differ to signify a noticeable difference in walking ability for patients with chronic obstructive pulmonary disease (COPD)? We studied individuals with stable COPD (n = 112, mean age = 67 yr, mean FEV1 = 975 ml) and estimated the smallest difference in 6MW distances that was associated with a noticeable difference in patients' subjective comparison ratings of their walking ability. We found that the 6MW was significantly correlated with patients' ratings of their walking ability relative to other patients (r = 0.59, 95% confidence interval [CI]: 0.54 to 0.63). Distances needed to differ by 54 m for the average patient to stop rating themselves as "about the same" and start rating themselves as either "a little bit better" or "a little bit worse" (95% CI: 37 to 71 m). We suggest that differences in functional status can be statistically significant but below the threshold at which patients notice a difference in themselves relative to others; an awareness of the smallest difference in walking distance that is noticeable to patients may help clinicians interpret the effectiveness of symptomatic treatments for COPD.

Drop-out and attendance in pulmonary rehabilitation: the role of clinical and psychosocial variables.

Maarten J. Fischer,  Margreet Scharloo,  Jannie Abbink … (2009)
In spite of the well-demonstrated benefits for patients with COPD, pulmonary rehabilitation programmes show considerable drop-out and suboptimal attendance rates. The purpose of this prospective study is to examine causes for drop-out and non-attendance during a 12 week multidisciplinary pulmonary rehabilitation programme, and to investigate whether sociodemographic and medical factors as well as patients' perception of their illness are related to drop-out and non-attendance. Two hundred and seventeen patients with COPD who were referred to a rehabilitation centre participated in this multicentre study. Prior to treatment, patients received a questionnaire, which included the Illness Perception Questionnaire-Revised. Clinical data were drawn from medical records. Drop-out and attendance were recorded during the programme. Fifty patients (23%) did not complete the rehabilitation course, of which half was due to medical reasons (e.g. exacerbations, hospitalisations). Non-completion could not be predicted by baseline sociodemographic, clinical or psychological variables. Patients who declined treatment did not differ from patients who dropped out due to medical reasons. On average, patients attended 92% of all scheduled appointments. Of all missed appointments, approximately 20% were accountable to factors beyond patients' control (e.g. absent therapists, hospitalisations). Smoking, living alone, a lower fat free mass and lower confidence in treatment increased the chance of patients not attending an appointment during rehabilitation. In general, adherence in rehabilitation is high. However, paying attention to patients' nutritional status and creating a positive expectation of treatment during referral and intake appear to be important if one aims to optimise patients' attendance during rehabilitation.