Fuel for Fun: a cluster-randomized controlled study of cooking skills, eating behaviors, and physical activity of 4th graders and their families 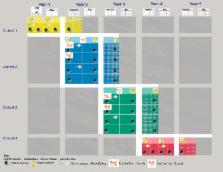 Childhood obesity remains a serious concern in the United States and in many other countries. Direct experience preparing and tasting healthful foods and increasing activity during the school day are promising prevention approaches. Engaging parents and families remains an important challenge. Fuel for Fun: Cooking with Kids Plus Parents and Play is a multi-component school- and family-based intervention for 4th graders and their families intended to promote positive food and activity environments, policies and behaviors at the individual, family and school levels. This paper describes the design and evaluation plan.

Four cohorts of 4th-graders and their parents from 8 schools in 2 districts in the same Northern Colorado region are participating in a 4-arm cluster randomized controlled trial. Theory-based Fuel for Fun consists of 5 components delivered over 1 school year: 1) Cooking with Kids - Colorado; an experiential classroom-based cooking and tasting curriculum, 2) Cafeteria Connections; cafeteria-based reinforcements of classroom food experiences using behavioral economic strategies, 3) SPARK active recess; a playground intervention to engage children in moderate to vigorous activity, 4) Fuel for Fun Family; multi-element supports targeting parents to reinforce the 3 school-based components at home, and 5) About Eating; an online interactive program for parents addressing constructs of eating competence and food resource management. Outcomes include child and parent measures of fruit and vegetable preferences and intake, cooking, physical activity, sedentary behaviors and attitudes. School level data assess lunch plate waste and physical activity at recess. In-depth diet and accelerometry assessments are collected with a subsample of parent-child dyads. Data are collected at baseline, immediately post-intervention at 7 months, and at 12 month follow-up. We anticipate recruiting 1320–1584 children and their parents over the length of the project.

The Fuel for Fun study design allows for impact assessment of school-, family- and online parent-based intervention components separately and in combination. Study strengths include use of theory- and evidence-based programs, valid child and parent self-report instruments, and objective measures of food, cooking, and physical activity behaviors at the individual, family and school levels. Parent involvement and engagement is examined through multiple strategies.

Validation of the GENEA Accelerometer.

Dale W Esliger, Ann Rowlands, Tina L Hurst … (2011)
The study aims were: 1) to assess the technical reliability and validity of the GENEA using a mechanical shaker; 2) to perform a GENEA value calibration to develop thresholds for sedentary and light-, moderate-, and vigorous-intensity physical activity; and 3) to compare the intensity classification of the GENEA with two widely used accelerometers. A total of 47 GENEA accelerometers were attached to a shaker and vertically accelerated, generating 15 conditions of varying acceleration and/or frequency. Reliability was calculated using SD and intrainstrument and interinstrument coefficients of variation, whereas validity was assessed using Pearson correlation with the shaker acceleration as the criterion. Next, 60 adults wore a GENEA on each wrist and on the waist (alongside an ActiGraph and RT3 accelerometer) while completing 10-12 activity tasks. A portable metabolic gas analyzer provided the criterion measure of physical activity. Analyses involved the use of Pearson correlations to establish criterion and concurrent validity and receiver operating characteristic curves to establish intensity cut points. The GENEA demonstrated excellent technical reliability (CVintra = 1.4%, CVinter = 2.1%) and validity (r = 0.98, P < 0.001) using the mechanical shaker. The GENEA demonstrated excellent criterion validity using VO2 as the criterion (left wrist, r = 0.86; right wrist, r = 0.83; waist, r = 0.87), on par with the waist-worn ActiGraph and RT3. The GENEA demonstrated excellent concurrent validity compared with the ActiGraph (r = 0.92) and the RT3 (r = 0.97). The waist-worn GENEA had the greatest classification accuracy (area under the receiver operating characteristic curve (AUC) = 0.95), followed by the left (AUC = 0.93) and then the right wrist (AUC = 0.90). The accuracy of the waist-worn GENEA was virtually identical with that of the ActiGraph (AUC = 0.94) and RT3 (AUC = 0.95). The GENEA is a reliable and valid measurement tool capable of classifying the intensity of physical activity in adults.

Revisiting a neglected construct: parenting styles in a child-feeding context.

Determinants of fruit and vegetable consumption among 6-12-year-old children and effective interventions to increase consumption.