Utility of TMS to understand the neurobiology of speech 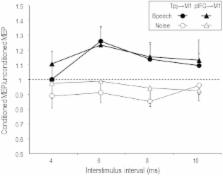 According to a traditional view, speech perception and production are processed largely separately in sensory and motor brain areas. Recent psycholinguistic and neuroimaging studies provide novel evidence that the sensory and motor systems dynamically interact in speech processing, by demonstrating that speech perception and imitation share regional brain activations. However, the exact nature and mechanisms of these sensorimotor interactions are not completely understood yet. Transcranial magnetic stimulation (TMS) has often been used in the cognitive neurosciences, including speech research, as a complementary technique to behavioral and neuroimaging studies. Here we provide an up-to-date review focusing on TMS studies that explored speech perception and imitation. Single-pulse TMS of the primary motor cortex (M1) demonstrated a speech specific and somatotopically specific increase of excitability of the M1 lip area during speech perception (listening to speech or lip reading). A paired-coil TMS approach showed increases in effective connectivity from brain regions that are involved in speech processing to the M1 lip area when listening to speech. TMS in virtual lesion mode applied to speech processing areas modulated performance of phonological recognition and imitation of perceived speech. In summary, TMS is an innovative tool to investigate processing of speech perception and imitation. TMS studies have provided strong evidence that the sensory system is critically involved in mapping sensory input onto motor output and that the motor system plays an important role in speech perception.

The cortical organization of speech processing.

Gregory Hickok,  David Poeppel (2007)
Despite decades of research, the functional neuroanatomy of speech processing has been difficult to characterize. A major impediment to progress may have been the failure to consider task effects when mapping speech-related processing systems. We outline a dual-stream model of speech processing that remedies this situation. In this model, a ventral stream processes speech signals for comprehension, and a dorsal stream maps acoustic speech signals to frontal lobe articulatory networks. The model assumes that the ventral stream is largely bilaterally organized--although there are important computational differences between the left- and right-hemisphere systems--and that the dorsal stream is strongly left-hemisphere dominant.

Kailash P. Bhatia,  James Edwards,  Ying Huang … (2005)
It has been 30 years since the discovery that repeated electrical stimulation of neural pathways can lead to long-term potentiation in hippocampal slices. With its relevance to processes such as learning and memory, the technique has produced a vast literature on mechanisms of synaptic plasticity in animal models. To date, the most promising method for transferring these methods to humans is repetitive transcranial magnetic stimulation (rTMS), a noninvasive method of stimulating neural pathways in the brain of conscious subjects through the intact scalp. However, effects on synaptic plasticity reported are often weak, highly variable between individuals, and rarely last longer than 30 min. Here we describe a very rapid method of conditioning the human motor cortex using rTMS that produces a controllable, consistent, long-lasting, and powerful effect on motor cortex physiology and behavior after an application period of only 20-190 s.

Action recognition in the premotor cortex