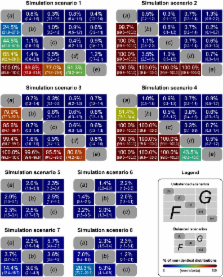 Permutation methods can provide exact control of false positives and allow the use of non-standard statistics, making only weak assumptions about the data. With the availability of fast and inexpensive computing, their main limitation would be some lack of flexibility to work with arbitrary experimental designs. In this paper we report on results on approximate permutation methods that are more flexible with respect to the experimental design and nuisance variables, and conduct detailed simulations to identify the best method for settings that are typical for imaging research scenarios. We present a generic framework for permutation inference for complex general linear models ( glms) when the errors are exchangeable and/or have a symmetric distribution, and show that, even in the presence of nuisance effects, these permutation inferences are powerful while providing excellent control of false positives in a wide range of common and relevant imaging research scenarios. We also demonstrate how the inference on glm parameters, originally intended for independent data, can be used in certain special but useful cases in which independence is violated. Detailed examples of common neuroimaging applications are provided, as well as a complete algorithm – the “randomise” algorithm – for permutation inference with the glm.

Katherine Button,  John Ioannidis,  Claire Mokrysz … (2013)
A study with low statistical power has a reduced chance of detecting a true effect, but it is less well appreciated that low power also reduces the likelihood that a statistically significant result reflects a true effect. Here, we show that the average statistical power of studies in the neurosciences is very low. The consequences of this include overestimates of effect size and low reproducibility of results. There are also ethical dimensions to this problem, as unreliable research is inefficient and wasteful. Improving reproducibility in neuroscience is a key priority and requires attention to well-established but often ignored methodological principles.

S. Smith,  T Nichols (2009)
Many image enhancement and thresholding techniques make use of spatial neighbourhood information to boost belief in extended areas of signal. The most common such approach in neuroimaging is cluster-based thresholding, which is often more sensitive than voxel-wise thresholding. However, a limitation is the need to define the initial cluster-forming threshold. This threshold is arbitrary, and yet its exact choice can have a large impact on the results, particularly at the lower (e.g., t, z < 4) cluster-forming thresholds frequently used. Furthermore, the amount of spatial pre-smoothing is also arbitrary (given that the expected signal extent is very rarely known in advance of the analysis). In the light of such problems, we propose a new method which attempts to keep the sensitivity benefits of cluster-based thresholding (and indeed the general concept of "clusters" of signal), while avoiding (or at least minimising) these problems. The method takes a raw statistic image and produces an output image in which the voxel-wise values represent the amount of cluster-like local spatial support. The method is thus referred to as "threshold-free cluster enhancement" (TFCE). We present the TFCE approach and discuss in detail ROC-based optimisation and comparisons with cluster-based and voxel-based thresholding. We find that TFCE gives generally better sensitivity than other methods over a wide range of test signal shapes and SNR values. We also show an example on a real imaging dataset, suggesting that TFCE does indeed provide not just improved sensitivity, but richer and more interpretable output than cluster-based thresholding.

Estimates of the Regression Coefficient Based on Kendall's Tau