The role of the reef flat in coral reef trophodynamics: Past, present, and future 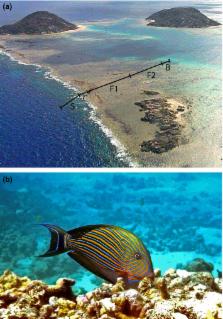 The reef flat is one of the largest and most distinctive habitats on coral reefs, yet its role in reef trophodynamics is poorly understood. Evolutionary evidence suggests that reef flat colonization by grazing fishes was a major innovation that permitted the exploitation of new space and trophic resources. However, the reef flat is hydrodynamically challenging, subject to high predation risks and covered with sediments that inhibit feeding by grazers. To explore these opposing influences, we examine the Great Barrier Reef ( GBR) as a model system. We focus on grazing herbivores that directly access algal primary productivity in the epilithic algal matrix ( EAM). By assessing abundance, biomass, and potential fish productivity, we explore the potential of the reef flat to support key ecosystem processes and its ability to maintain fisheries yields. On the GBR, the reef flat is, by far, the most important habitat for turf‐grazing fishes, supporting an estimated 79% of individuals and 58% of the total biomass of grazing surgeonfishes, parrotfishes, and rabbitfishes. Approximately 59% of all (reef‐wide) turf algal productivity is removed by reef flat grazers. The flat also supports approximately 75% of all grazer biomass growth. Our results highlight the evolutionary and ecological benefits of occupying shallow‐water habitats (permitting a ninefold population increase). The acquisition of key locomotor and feeding traits has enabled fishes to access the trophic benefits of the reef flat, outweighing the costs imposed by water movement, predation, and sediments. Benthic assemblages on reefs in the future may increasingly resemble those seen on reef flats today, with low coral cover, limited topographic complexity, and extensive EAM. Reef flat grazing fishes may therefore play an increasingly important role in key ecosystem processes and in sustaining future fisheries yields.

Lag effects in the impacts of mass coral bleaching on coral reef fish, fisheries, and ecosystems.

Nicholas Graham,  Jan Robinson,  Richard Wilson … (2007)
Recent episodes of coral bleaching have led to wide-scale loss of reef corals and raised concerns over the effectiveness of existing conservation and management efforts. The 1998 bleaching event was most severe in the western Indian Ocean, where coral declined by up to 90% in some locations. Using fisheries-independent data, we assessed the long-term impacts of this event on fishery target species in the Seychelles, the overall size structure of the fish assemblage, and the effectiveness of two marine protected areas (MPAs) in protecting fish communities. The biomass of fished species above the size retained in fish traps changed little between 1994 and 2005, indicating no current effect on fishery yields. Biomass remained higher in MPAs, indicating they were effective in protecting fish stocks. Nevertheless, the size structure of the fish communities, as described with size-spectra analysis, changed in both fished areas and MPAs, with a decline in smaller fish ( 45 cm). We believe this represents a time-lag response to a reduction in reef structural complexity brought about because fishes are being lost through natural mortality and fishing, and are not being replaced by juveniles. This effect is expected to be greater in terms of fisheries productivity and, because congruent patterns are observed for herbivores, suggests that MPAs do not offer coral reefs long-term resilience to bleaching events. Corallivores and planktivores declined strikingly in abundance, particularly in MPAs, and this decline was associated with a similar pattern of decline in their preferred corals. We suggest that climate-mediated disturbances, such as coral bleaching, be at the fore of conservation planning for coral reefs.

Andrew Hoey,  David R. Bellwood,  Terry Hughes (2006)
The world's coral reefs are in decline, with many exhibiting a phase shift from coral to macroalgal dominance . This change is often associated with habitat loss and overharvesting of herbivorous fishes, particularly parrotfishes and surgeonfishes . The challenge is to reverse this decline and enhance the resilience of coral-reef ecosystems . We demonstrate, by using a large-scale experimentally induced phase shift, that the rapid reversal from a macroalgal-dominated to a coral- and epilithic algal-dominated state was not a result of herbivory by parrotfishes or surgeonfishes. Surprisingly, phase-shift reversal was primarily driven by a single batfish species (Platax pinnatus), a fish previously regarded as an invertebrate feeder. The 43 herbivorous fishes in the local fauna played only a minor role, suggesting that biodiversity may not offer the protection we hoped for in complex ecosystems. Our findings highlight the dangers faced by coral reefs and other threatened complex ecosystems: Species or functional groups that prevent phase shifts may not be able to reverse phase shifts once they occur. Nevertheless, reversal is possible. The critical issue is to identify and protect those groups that underpin the resilience and regeneration of complex ecosystems.