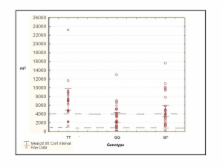 The 516G > T polymorphism in exon 4 of the CYP2B6 gene has been associated with increased plasma Efavirenz (EFV) concentrations. EFV concentrations greater than the recommended therapeutic range have been associated with the increased likelihood of developing adverse CNS effects. The aims of this study were to a) determine the presence of the 516G > T and other CYP2B6 exon 4 polymorphisms in a South African group of HIV-infected individuals b) investigate the relationship between the EFV plasma concentrations, the CYP2B6 516G > T polymorphism and the occurrence of CNS related side effects in this group of patients and c) develop and validate a rapid method for determination of EFV in plasma.

Data from 80 patients is presented. Genetic polymorphisms in exon 4 of the CYP2B6 gene were identified using PCR amplification of this region followed by sequencing of the amplification products. EFV concentrations were analysed by UPLC-MS/MS. Assessment of the presence of CNS related side effects following EFV initiation were elicited with the use of a questionnaire together with physical examination.

Plasma EFV concentrations displayed high inter-individual variability amongst subjects with concentrations ranging from 94 μg/l to 23227 μg/l at 2 weeks post initiation of treatment. For the 516G > T polymorphism the following frequencies were observed 23% of patients were TT homozygous, 36% GG and 41% GT. The TT homozygous patients had significantly higher EFV concentrations vs. those with the wild (GG) genotype (p < 0.05). Patients who experienced no side effects had significantly lower EFV plasma concentrations vs. the group of patients which experienced the most severe side effects (p < 0.05).

Catia Marzolini,  Amalio Telenti,  Laurent Decosterd … (2001)
Limited information exists on the clinical usefulness of drug level monitoring for efavirenz, a once-daily non-nucleoside reverse transcriptase inhibitor (NNRTI). The aim of this study was to determine whether efavirenz plasma concentration monitoring could predict treatment failure and central nervous system (CNS) tolerability. Blood samples were obtained from 130 HIV-infected patients receiving efavirenz in combination with other antiretroviral agents for more than 3 months. Efavirenz plasma concentrations were measured by high-performance liquid chromatography. An evaluation of CNS side-effects was performed and the viral load, CD4 cell count and other clinical and laboratory data were assessed. In 85 patients, these measures were repeated at 3 month intervals. Efavirenz plasma levels (n = 226) were measured at an average of 14 h after drug intake. Drug concentrations ranged from 125 to 15230 microg/l (median 2188). Large inter-patient (CV 118%) and limited intra-patient (CV 30%) variabilities were observed in efavirenz levels. Virological failure was observed in 50% of patients with low efavirenz levels ( 4000 microg/l) compared with patients with 1000-4000 microg/l. Treatment failure and CNS side-effects are associated with low and high efavirenz plasma levels, respectively. The important inter-individual variability in efavirenz levels strongly argues for dose adjustment on the basis of therapeutic drug monitoring to optimize treatment.

Andrew Gulick,  Camlin Tierney,  Heather J Ribaudo … (2004)
Efavirenz is an effective antiretroviral agent, but central nervous system side effects occur commonly, and population (racial) differences in pharmacokinetics and response have been reported. Efavirenz is metabolized by cytochrome P4502B6 (CYP2B6). We investigated whether polymorphisms in CYP2B6, CYP3A4, CYP3A5, and MDR1 were associated with efavirenz central nervous system side effects and pharmacokinetics. Twenty-four week cohort from a randomized study. Adult AIDS Clinical Trials Group study A5097s examined relationships between central nervous system side effects and efavirenz plasma concentration-time profiles in HIV-infected subjects. Efavirenz plasma pharmacokinetics were estimated by a population-based method. Central nervous system symptoms were assessed by questionnaires and neuropsychological testing. Study subjects included 89 (57%) European-Americans, 50 (32%) African-Americans, and 15 (10%) Hispanics. The CYP2B6 T/T genotype at position 516 (GlnHis) was more common in African-Americans (20%) than in European-Americans (3%), and was associated with greater efavirenz plasma exposure (P < 0.0001). The median efavirenz [area-under-the-curve] (0-24 h) according to G/G, G/T, and T/T genotype was 44 (n = 78), 60 (n = 60), and 130 (n = 14) mug.h/ml, respectively (P < 0.0001). The CYP2B6 G516T genotype was also associated with central nervous system symptoms at week 1 (P = 0.036). Analysis of DNA from other subjects confirmed population differences in frequency of the G516T variant. No associations were apparent with the other polymorphisms studied. A CYP2B6 allelic variant that is more common in African-Americans than in Europeans-Americans was associated with significantly greater efavirenz plasma exposure during HIV therapy. Inter-individual differences in metabolism may, in part, explain susceptibility to efavirenz central nervous system side effects.

Monica Hammer,  B. Gazzard,  J Gatell … (2004)
Substantial changes in the field of human immunodeficiency virus (HIV) treatment have occurred in the last 2 years, prompting revision of the guidelines for antiretroviral management of adults with established HIV infection. To update recommendations for physicians who provide HIV care regarding when to start antiretroviral therapy, what drugs to start with, when to change drug regimens, and what drug regimens to switch to after therapy fails. Evidence was identified and reviewed by a 16-member noncompensated panel of physicians with expertise in HIV-related basic science and clinical research, antiretroviral therapy, and HIV patient care. The panel was designed to have broad US and international representation for areas with adequate access to antiretroviral management. Evidence considered included published basic science, clinical research, and epidemiological data (identified by experts in the field or extracted through MEDLINE searches using terms relevant to antiretroviral therapy) and abstracts from HIV-oriented scientific conferences between July 2002 and May 2004. Data were reviewed to identify any information that might change previous guidelines. Based on panel discussion, guidelines were drafted by a writing committee and discussed by the panel until consensus was reached. Four antiretroviral drugs recently have been made available and have broadened the options for initial and subsequent regimens. New data allow more definitive recommendations for specific drugs or regimens to include or avoid, particularly with regard to initial therapy. Recommendations are rated according to 7 evidence categories, ranging from I (data from prospective randomized clinical trials) to VII (expert opinion of the panel). Further insights into the roles of drug toxic effects, drug resistance, and pharmacological interactions have resulted in additional guidance for strategic approaches to antiretroviral management.