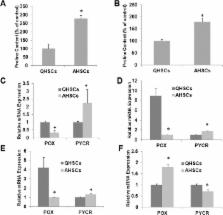 Liver fibrosis is the excessive accumulation of extracellular matrix proteins, which is mainly caused by accumulation of activated hepatic stellate cells (HSCs). The mechanisms of activation and proliferation of HSCs, two key events after liver damage, have been studied for many years. Here we report a novel pathway to control HSCs by regulating glutamine metabolism. We demonstrated that the proliferation of HSCs is critically dependent on glutamine that is used to generate α-ketoglutarate (α-KG) and non-essential amino acid (NEAA). In addition, both culture- and in vivo-activated HSCs have increased glutamine utilization and increased expression of genes related to glutamine metabolism, including GLS (glutaminase), aspartate transaminase (GOT1) and glutamate dehydrogenase (GLUD1). Inhibition of these enzymes, as well as glutamine depletion, had a significant inhibitory effect on HSCs activation. In addition to providing energy expenditure, conversion of glutamine to proline is enhanced. The pool of free proline may also be increased via downregulation of POX expression. Hedgehog signaling plays an important role in the regulation of glutamine metabolism, as well as TGF-β1, c-Myc, and Ras signalings, via transcriptional upregulation and repression of key metabolic enzymes in this pathway. Finally, changes in glutamine metabolism were also found in mouse liver tissue following CCl4-induced acute injury. Conclusion: Glutamine metabolism plays an important role in regulating the proliferation and activation of HSCs. Strategies that are targeted at glutamine metabolism may represent a novel therapeutic approach to the treatment of liver fibrosis.

Matt I Gross,  Susan D Demo,  Jennifer B. Dennison … (2014)
Glutamine serves as an important source of energy and building blocks for many tumor cells. The first step in glutamine utilization is its conversion to glutamate by the mitochondrial enzyme glutaminase. CB-839 is a potent, selective, and orally bioavailable inhibitor of both splice variants of glutaminase (KGA and GAC). CB-839 had antiproliferative activity in a triple-negative breast cancer (TNBC) cell line, HCC-1806, that was associated with a marked decrease in glutamine consumption, glutamate production, oxygen consumption, and the steady-state levels of glutathione and several tricarboxylic acid cycle intermediates. In contrast, no antiproliferative activity was observed in an estrogen receptor-positive cell line, T47D, and only modest effects on glutamine consumption and downstream metabolites were observed. Across a panel of breast cancer cell lines, GAC protein expression and glutaminase activity were elevated in the majority of TNBC cell lines relative to receptor positive cells. Furthermore, the TNBC subtype displayed the greatest sensitivity to CB-839 treatment and this sensitivity was correlated with (i) dependence on extracellular glutamine for growth, (ii) intracellular glutamate and glutamine levels, and (iii) GAC (but not KGA) expression, a potential biomarker for sensitivity. CB-839 displayed significant antitumor activity in two xenograft models: as a single agent in a patient-derived TNBC model and in a basal like HER2(+) cell line model, JIMT-1, both as a single agent and in combination with paclitaxel. Together, these data provide a strong rationale for the clinical investigation of CB-839 as a targeted therapeutic in patients with TNBC and other glutamine-dependent tumors.