Prediction of Preventive Behaviors of the Needlestick Injuries during Surgery among Operating Room Personnel: Application of the Health Belief Model 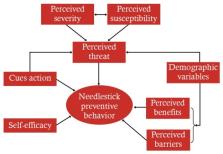 Operating room personnel are at high risk of needlestick injuries (NSIs) and exposure to blood and body fluids.

To investigate the predictors of NSIs preventive behaviors during surgery among operating room personnel based on a health belief model (HBM).

This cross-sectional study was conducted on 128 operating room personnel in Hamadan, western Iran. Participants were selected, by census sampling, from teaching hospitals, completed a self-reported questionnaire including demographic characteristics, knowledge and HBM constructs.

The levels of knowledge and perceived self-efficacy for the NSIs preventive behaviors among operating room personnel were not satisfactory. However, the levels of perceived benefits, susceptibility and severity were reported to be relatively good. The results showed that the perceived susceptibility (β ‑0.627) and cues to action (β 0.695) were the most important predictors of the NSIs preventive behaviors.

The framework of the HBM is useful to predict the NSIs preventive behaviors among operating room personnel.

Towards an Effective Health Interventions Design: An Extension of the Health Belief Model

Occupational exposures in emergency medical service providers and knowledge of and compliance with universal precautions.

Shelley Harris, Laura Nicolai (2010)
Little is known about compliance with universal precautions (CUP) or occupational exposures to blood and body fluids among Emergency Medical Services (EMS) providers. The objective of this study was to obtain estimates of CUP and knowledge of universal precautions (KUP), occupational exposures, and needle and lancet sticks in the prehospital environment. A convenience sample of workers (n=311, 51% response) from 17 agencies in Virginia that provided emergency ground transportation (volunteer, commercial, government rescue squads, and fire departments) completed a questionnaire on certification and training, KUP, CUP, exposures and needlesticks, risk perceptions, and demographic variables. Nearly all EMS providers reported exposures and were concerned about risk of HIV and hepatitis. Providers reported inconsistent CUP when treating patients or using needles, including failure to wear gloves (17%) and to appropriately dispose of contaminated materials (79%), including needles (87%), at all times. Certification type (advanced and basic) was related to both KUP and CUP. Of those respondents reporting current sharps use, 40% recapped needles. A lancet stick was reported by 1.4% (n=5), and 4.5% reported a needlestick (n=14). EMS providers working in the prehospital environment experience significant exposures but are not consistently using universal precautions. 2010 Association for Professionals in Infection Control and Epidemiology, Inc. Published by Mosby, Inc. All rights reserved.

This work is licensed under a Creative Commons Attribution-NonCommercial-ShareAlike 4.0 International License.