The multifaceted role of pirfenidone and its novel targets 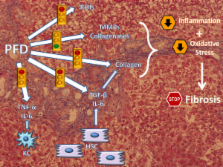 Pirfenidone (PFD) is a molecule that exhibits antifibrotic properties in a variety of in vitro and animal models of lung, liver and renal fibrosis. These pathologies share many fibrogenic pathways with an abnormal fibrous wound-healing process; consequently, tissue repair and tissue regeneration-regulating mechanisms are altered.

To investigate the usefulness of PFD as an antifibrotic agent in clinical and experimental models of fibrotic disease.

There is a growing understanding of the molecular effects of PFD on the wound healing mechanism, leading to novel approaches for the management of fibrosis in lung, liver and renal tissues. Although the optimum treatment for fibrosis remains undefined, it is possible that combined therapeutic regimens that include this wide-application molecule, pirfenidone, could offer a useful treatment for fibrotic disease.

M Ohi,  Shoji Kudoh,  Sonoko Nagai … (2005)
Idiopathic pulmonary fibrosis (IPF) is a fatal disorder without an effective therapy to date. In a double-blind, randomized, placebo-controlled trial, 107 patients were prospectively evaluated for efficacy of a novel compound, pirfenidone. The difference in the change in the lowest oxygen saturation by pulse oximetry (SpO2) during a 6-minute exercise test, the primary endpoint, from baseline to 6 months was not significant between the two groups (p = 0.0722). In a prespecified subset of patients who maintained a SpO2 greater than 80% during a 6-minute exercise test at baseline, the lowest SpO2 improved during a 6-minute exercise test in the pirfenidone group at 6 and 9 months (p = 0.0069 and 0.0305, respectively). Positive treatment effect was demonstrated in secondary endpoints: (1) change in VC measurements at 9 months (p = 0.0366) and (2) episodes of acute exacerbation of IPF occurring exclusively in the placebo group during the 9 months (p = 0.0031). Significant adverse events were associated with pirfenidone; however, adherence to treatment regimen was similar between pirfenidone and placebo groups. In conclusion, treatment with pirfenidone improved VC and prevented acute exacerbation of IPF during the 9 months of follow-up. Future long-term studies are needed to clarify the overall safety and efficacy of pirfenidone in IPF.