Adverse reaction to ceftriaxone in a 28-day-old infant undergoing urgent craniotomy due to epidural hematoma: review of neonatal biliary pseudolithiasis 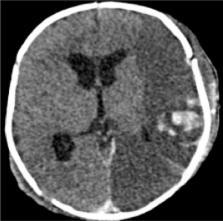 The debate as to whether to administer ceftriaxone to neonates is likely to continue. Ceftriaxone has numerous advantages for critically ill pediatric patients. However, it is also known to contribute substantially to the development of biliary pseudolithiasis. Although pediatric patients rarely develop gallbladder disorders, this complication may lead to adverse events in high-risk patients with predisposing factors, particularly in neonates and infants treated with ceftriaxone. In this paper we present an interesting case report of a 28-day-old neonate with spontaneous severe epidural hematoma who developed biliary pseudolithiasis related to the use of ceftriaxone. We also discuss the efficacy of ceftriaxone in neonates and infants. Neonatologists and pediatric intensivists should be aware of the higher risk of co-existence of hyperbilirubinemia and gallbladder disorders while using ceftriaxone in pediatric settings.

Antibiotic allergies in children and adults: from clinical symptoms to skin testing diagnosis.

Antonino Romano,  Jean-Christoph Caubet (2021)
Hypersensitivity reactions to β-lactam and non-β-lactam antibiotics are commonly reported. They can be classified as immediate or nonimmediate according to the time interval between the last drug administration and their onset. Immediate reactions occur within 1 hour after the last drug administration and are manifested clinically by urticaria and/or angioedema, rhinitis, bronchospasm, and anaphylactic shock; they may be mediated by specific IgE-antibodies. Nonimmediate reactions occur more than 1 hour after the last drug administration. The most common manifestations are maculopapular exanthems; specific T lymphocytes may be involved in this type of manifestation. The diagnostic evaluation of hypersensitivity reactions to antibiotics is usually complex. The patient's history is fundamental; the allergic examination is based mainly on in vivo tests selected on the basis of the clinical features and the type of reaction, immediate or nonimmediate. Immediate reactions can be assessed by immediate-reading skin tests and, in selected cases, drug provocation tests. Nonimmediate reactions can be assessed by delayed-reading skin tests, patch tests, and drug provocation tests. However, skin tests have been well validated mainly for β-lactams but less for other classes of antibiotics.

Clinical pharmacology of midazolam in infants and children.

Kendall Blumer (1998)
Midazolam is a parenteral benzodiazepine with sedative, amnesic, anxiolytic, muscle relaxant and anticonvulsant properties. The drug exerts its clinical effect by binding to a receptor complex which facilitates the action of the inhibitory neurotransmitter gamma-aminobutyric acid (GABA). Midazolam has a faster onset and shorter duration of action than other benzodiazepines such as diazepam and lorazepam. The most serious adverse events associated with midazolam in children include hypoventilation, decreased oxygen saturation, apnoea and hypotension. It is water soluble in the commercially prepared formulation but becomes lipid soluble at physiological pH and can then cross the blood brain barrier. It is metabolised in the liver by the cytochrome P450 system, and its chief metabolite is 1-hydroxymethyl midazolam. The latter is conjugated to the glucuronide form, and it has only minimal biological activity. Midazolam is excreted primarily by the kidney. Its half-life in children over 12 months is reported to be 0.8 to 1.8 hours, with a clearance of 4.7 to 19.7 ml/min/kg. Doses given to children must be calculated on a mg/kg basis. For children 6 months to 5 years of age the initial dose is 0.05 to 0.1 mg/kg. A total dose up to 0.6 mg/kg titrated slowly may be necessary to achieve the desired endpoint. For children 6 to 12 years of age the initial dose is 0.025 to 0.05 mg/kg with a total dose up to 0.4 mg/kg to achieve the desired end-point.