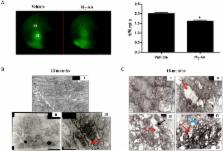 Previous studies showed that autoantibodies (M 2-AA) against the second extracellular loop of M 2 muscarinic receptor (M 2AChR-el2) from dilated cardiomyopathy (DCM) serum could induce DCM-like morphological changes in mice hearts. However, the effects of M 2-AA on the cardiac function during the process of DCM and the potential mechanisms are not fully known. The present study was designed to dynamically observe the cardiac function, mitochondrial changes, and M 2 receptor binding characteristics in rats long-term stimulated with M 2-AA in vivo.

Our study suggested that long-term stimulation with M 2-AA leaded to the ventricular dilatation and gradual deterioration of cardiac dysfunction. Mitochondrial damage and the down-regulation of M 2 receptor density and affinity may be involved in the process.

P. Norman,  Harris A Gelbard,  Seth W. Perry … (2011)
Fluorescent probes for monitoring mitochondrial membrane potential are frequently used for assessing mitochondrial function, particularly in the context of cell fate determination in biological and biomedical research. However, valid interpretation of results obtained with such probes requires careful consideration of numerous controls, as well as possible effects of non-protonic charges on dye behavior. In this context, we provide an overview of some of the important technical considerations, controls, and parallel complementary assays that can be employed to help ensure appropriate interpretation of results, thus providing a practical usage guide for monitoring mitochondrial membrane potentials with cationic probes. In total, this review will help illustrate both the strengths and potential pitfalls of common mitochondrial membrane potential dyes, and highlight best-usage approaches for their efficacious application in life sciences research.

From myocarditis to cardiomyopathy: mechanisms of inflammation and cell death: learning from the past for the future.

C. Kawai (1999)
A progression from viral myocarditis to dilated cardiomyopathy has long been hypothesized, but the actual extent of this progression has been uncertain. However, a causal link between viral myocarditis and dilated cardiomyopathy has become more evident than before with the tremendous developments in the molecular analyses of autopsy and endomyocardial biopsy specimens, new techniques of viral gene amplification, and modern immunology. The persistence of viral RNA in the myocardium beyond 90 days after inoculation, confirmed by the method of polymerase chain reaction, has given us new insights into the pathogenesis of dilated cardiomyopathy. Moreover, new knowledge of T-cell-mediated immune responses in murine viral myocarditis has contributed a great deal to the understanding of the mechanisms of ongoing disease processes. Apoptotic cell death may provide the third concept to explain the pathogenesis of dilated cardiomyopathy, in addition to persistent viral RNA in the heart tissue and an immune system-mediated mechanism. Beneficial effects of alpha1-adrenergic blocking agents, carteolol, verapamil, and ACE inhibitors have been shown clinically and experimentally in the treatment of viral myocarditis and dilated cardiomyopathy. Antiviral agents should be more extensively investigated for clinical use. The rather discouraging results obtained to date with immunosuppressive agents in the treatment of viral myocarditis indicated the importance of sparing neutralizing antibody production, which may be controlled by B cells, and raised the possibility of promising developments in immunomodulating therapy.

This study was supported by grants from the 973 Program Earlier Research Project (2014CB560704) to Huirong Liu ( http://program.most.gov.cn); the National Natural Science Foundation Youth Project (81300694) to Suli Zhang ( http://www.nsfc.gov.cn/); the 2013 Specialized Research Fund for Doctoral Program of Higher Education (20131107120021) to Suli Zhang ( http://www.moe.gov.cn/); and grants from the Scientific Research Base Construction-Scientific and Technological Innovation Platform-Metabolic Disorders Related Cardiovascular Diseases Research Platform Construction (municipal level) (PXM2014_014226_000038; http://www.bjedu.gov.cn/publish/portal27/). The funders had no role in study design, data collection and analysis, decision to publish, or preparation of the manuscript.