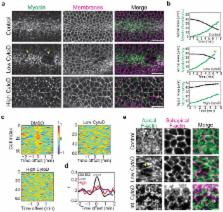 Matteo Rauzi, Pierre-François Lenne, Thomas Lecuit (2010)
Force generation by Myosin-II motors on actin filaments drives cell and tissue morphogenesis. In epithelia, contractile forces are resisted at apical junctions by adhesive forces dependent on E-cadherin, which also transmits tension. During Drosophila embryonic germband extension, tissue elongation is driven by cell intercalation, which requires an irreversible and planar polarized remodelling of epithelial cell junctions. We investigate how cell deformations emerge from the interplay between force generation and cortical force transmission during this remodelling in Drosophila melanogaster. The shrinkage of dorsal-ventral-oriented ('vertical') junctions during this process is known to require planar polarized junctional contractility by Myosin II (refs 4, 5, 7, 12). Here we show that this shrinkage is not produced by junctional Myosin II itself, but by the polarized flow of medial actomyosin pulses towards 'vertical' junctions. This anisotropic flow is oriented by the planar polarized distribution of E-cadherin complexes, in that medial Myosin II flows towards 'vertical' junctions, which have relatively less E-cadherin than transverse junctions. Our evidence suggests that the medial flow pattern reflects equilibrium properties of force transmission and coupling to E-cadherin by α-Catenin. Thus, epithelial morphogenesis is not properly reflected by Myosin II steady state distribution but by polarized contractile actomyosin flows that emerge from interactions between E-cadherin and actomyosin networks.

Edwin Munro, Jeremy Nance, James Priess (2004)
The C. elegans PAR proteins PAR-3, PAR-6, and PKC-3 are asymmetrically localized and have essential roles in cell polarity. We show that the one-cell C. elegans embryo contains a dynamic and contractile actomyosin network that appears to be destabilized near the point of sperm entry. This asymmetry initiates a flow of cortical nonmuscle myosin (NMY-2) and F-actin toward the opposite, future anterior, pole. PAR-3, PAR-6, and PKC-3, as well as non-PAR proteins that associate with the cytoskeleton, appear to be transported to the anterior by this cortical flow. In turn, PAR-3, PAR-6, and PKC-3 modulate cortical actomyosin dynamics and promote cortical flow. PAR-2, which localizes to the posterior cortex, inhibits NMY-2 from accumulating at the posterior cortex during flow, thus maintaining asymmetry by preventing inappropriate, posterior-directed flows. Similar actomyosin flows accompany the establishment of PAR asymmetries that form after the one-cell stage, suggesting that actomyosin-mediated cortical flows have a general role in PAR asymmetry.

Mechanism and function of formins in the control of actin assembly.

Bruce L. Goode, Michael Eck (2007)
Formins are a widely expressed family of proteins that govern cell shape, adhesion, cytokinesis, and morphogenesis by remodeling the actin and microtubule cytoskeletons. These large multidomain proteins associate with a variety of other cellular factors and directly nucleate actin polymerization through a novel mechanism. The signature formin homology 2 (FH2) domain initiates filament assembly and remains persistently associated with the fast-growing barbed end, enabling rapid insertion of actin subunits while protecting the end from capping proteins. On the basis of structural and mechanistic work, an integrated model is presented for FH2 processive motion. The adjacent FH1 domain recruits profilin-actin complexes and accelerates filament elongation. The most predominantly expressed formins in animals and fungi are autoinhibited through intramolecular interactions and appear to be activated by Rho GTPases and additional factors. Other classes of formins lack the autoinhibitory and/or Rho-binding domains and thus are likely to be controlled by alternative mechanisms.