Which comes first, Bentham’s chicken of utility, or his egg of truth? 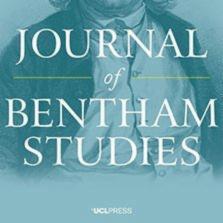 This paper argues that whilst Bentham’s logic, like all human activity, had pragmatic goals, so that all knowledge was subject to utilitarian evaluation, he clearly distinguished between utility and truth. § I presents the textual evidence that Bentham believed that truth was communicable in propositions relating to real entities, and discusses the limits to the information which true propositions could impart. It is argued further that the processes of phraseoplerosis and paraphrasis revealed which propositions relating to fictitious entities could be translated into propositions capable of bearing truth (i.e. relating to real entities). In § II an attempt is made to paraphrase ‘truth’, and the result indicates that Bentham did indeed interpret true as meaning ‘corresponds to the real’. In § III, it is argued that Bentham’s concept of truth combined both an objective element, according to which truth was understood as correspondence with reality, and a subjective element, according to which truth is simply an adjunct to subjective belief, while veracity relates to the accurate reporting of belief. The bridge between these elements was formed by the methods of Baconian induction, and the universal human ability to interpret the evidence arising from sensory data. Progress towards truth depended on the free exchange of the available empirical evidence, and of the inferences drawn therefrom. § IV discusses the relation between Bentham’s logic and pragmatism and fictionalism respectively, and argues that whilst Bentham’s thought anticipates central elements of both philosophies, it cannot consistently be characterized as either pragmatist or fictionalist, since ultimately, it is the rooting of the fictitious entity utility in the real entities of pleasure and pain which makes it the only viable moral principle. The value of true propositions is indeed to be subjected to utilitarian evaluation, but the very possibility of utilitarian evaluation itself depends on the existence of true propositions. § V investigates possible tensions between truth and utility, and asks where Bentham’s ultimate loyalty lies. It is argued that whilst the possibility of justified duplicity must, on any utilitarian view, remain on the table, Bentham’s recognition that the evidence of sense experience is available to all renders the probability of a successful perpetration of a utilitarian ‘noble lie’ vanishingly small.

This work is licensed under a Creative Commons Attribution-Non Commercial- No Derivatives 2.0 International. To view a copy of this license, visit https://creativecommons.org/licenses/by-nc-nd/2.0/