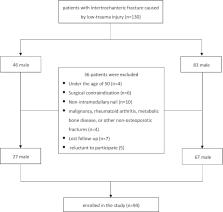 A retrospective consecutive series of 94 patients who had been diagnosed as intertrochanteric fracture at our institution was included from January 2019 to November 2019. All patients were treated with intramedullary fixation and followed up for at least 6 months. Demographic, surgical and anesthesiologic information, as well as radiographic data and complications were collected and reviewed.

J L Marsh,  Theddy Slongo,  Julie Agel … (2015)
The purpose of this new classification compendium is to republish the Orthopaedic Trauma Association's (OTA) classification. The OTA classification was originally published in a compendium of the Journal of Orthopaedic Trauma in 1996. It adopted The Comprehensive Classification of the Long Bones developed by Müller and colleagues and classified the remaining bones. In this compendium, the introductory chapter reviews new scientific information about classifying fractures that has been published in the last 11 years. The classification is presented in a revised format that is easier to follow. The OTA and AO classification will now have a unified alpha-numeric code eliminating the differences that have existed between the 2 codes. The code was significantly revised for the clavicle and scapula, foot and hand, and patella. Dislocations have been expanded on an anatomic basis and for most joints will be coded separately. This publication should stimulate new developments and interest in a unified language to code and classify fractures. Further improvements in classification will result in better patient care and clinical research.

Changes in trabecular pattern of the upper end of the femur as an index of osteoporosis.

Lisa Lix,  P Caetano,  S. Morin … (2011)
Non-traumatic fractures at typical osteoporotic sites are associated with increased mortality across all age groups, particularly in men. Furthermore, in certain age subgroups of women and men, this rate remained elevated beyond 5 years for fractures of the hip, vertebrae, humerus, and other sites. Increased mortality rates have been documented following non-traumatic hip, vertebral, and shoulder fractures. However, data are lacking as to the duration of excess mortality and whether there is increased mortality following fractures at other sites. We determined mortality up to 15 years following incident fractures at typical osteoporotic sites. Using healthcare databases for the Province of Manitoba, Canada, we identified individuals 50 years and older with an incident non-traumatic fracture between 1986 and 2007. Each fracture case was matched to three fracture-free controls. Generalized linear models were used to test for trends in mortality and to estimate the relative risk for cases after adjusting for co-morbidity and living arrangements. During the study period, we identified 21,067 incident fractures in men followed by 10,724 (50.1%) deaths and 49,197 incident fractures in women followed by 22,018 deaths (44.8%). Seventy-six percent of the fractures were at sites other than the hip and vertebrae. After adjustment for age, number of co-morbidities, and level of dependence in living arrangements, the risk of death in cases, relative to controls, was increased in both sexes for hip, vertebral, humerus, wrist (in men only), and other fracture sites. Post-fracture mortality was higher in men than women. Relative mortality was the highest in the younger age groups across the spectrum of fracture sites. Fractures at typical osteoporotic sites are associated with increased mortality across all age groups, particularly in men. Better understanding of factors associated with increased post-fracture mortality should inform the development of management strategies.