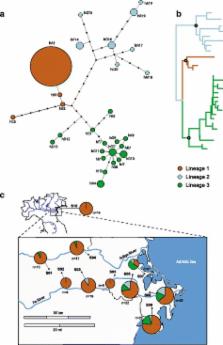 The Culex pipiens complex includes the most widespread mosquito species in the world. Cx. pipiens is the primary vector of the West Nile Virus (WNV) in Europe and North America. Cases of WNV have been recorded in Italy since 1998. In particular, wet areas along the Po River are considered some of the most WNV affected areas in Italy. Here, we analyzed the genetic structure of ten Cx. pipiens populations collected in the last part of the Po River including the Delta area.

We assessed the genetic variability of two mitochondrial markers, cytochrome oxidase 1 (COI) and 2 (COII), for a total of 1200 bp, and one nuclear marker, a fragment of acetylcholinesterase-2 (ace-2), 502 bp long. The effect of the landscape features was evaluated comparing haplotype and nucleotide diversity with the landscape composition.

The analysis showed a high genetic diversity in both COI and COII gene fragments mainly shared by the populations in the Delta area. The COI-COII network showed that the set of haplotypes found was grouped into three main supported lineages with the higher genetic variability gathered in two of the three lineages. By contrast, ace-2 fragment did not show the same differentiation, displaying alleles grouped in a single clade. Finally, a positive correlation between mitochondrial diversity and natural wetland areas was found.

The high mitochondrial genetic diversity found in Cx. pipiens populations from the Po River Delta contrasts with the low variability of inland populations. The different patterns of genetic diversity found comparing mitochondrial and nuclear markers could be explained by factors such as differences in effective population size between markers, sex biased dispersal or lower fitness of dispersing females. Moreover, the correlation between genetic diversity and wetland areas is consistent with ecosystem stability and lack of insecticide pressure characteristic of this habitat. The mtDNA polymorphism found in the Po River Delta is even more interesting due to possible linkages between the mitochondrial lineages and different biting behaviors of the mosquitoes influencing their vector ability of arboviral infections.

Accounting for decay of linkage disequilibrium in haplotype inference and missing-data imputation.

Matthew Stephens,  Paul Scheet (2005)
Although many algorithms exist for estimating haplotypes from genotype data, none of them take full account of both the decay of linkage disequilibrium (LD) with distance and the order and spacing of genotyped markers. Here, we describe an algorithm that does take these factors into account, using a flexible model for the decay of LD with distance that can handle both "blocklike" and "nonblocklike" patterns of LD. We compare the accuracy of this approach with a range of other available algorithms in three ways: for reconstruction of randomly paired, molecularly determined male X chromosome haplotypes; for reconstruction of haplotypes obtained from trios in an autosomal region; and for estimation of missing genotypes in 50 autosomal genes that have been completely resequenced in 24 African Americans and 23 individuals of European descent. For the autosomal data sets, our new approach clearly outperforms the best available methods, whereas its accuracy in inferring the X chromosome haplotypes is only slightly superior. For estimation of missing genotypes, our method performed slightly better when the two subsamples were combined than when they were analyzed separately, which illustrates its robustness to population stratification. Our method is implemented in the software package PHASE (v2.1.1), available from the Stephens Lab Web site.

Putting the "landscape" in landscape genetics.

John C M Murphy,  Margaret S. Robinson,  Madhuvanti M. Murphy … (2007)
Landscape genetics has emerged as a new research area that integrates population genetics, landscape ecology and spatial statistics. Researchers in this field can combine the high resolution of genetic markers with spatial data and a variety of statistical methods to evaluate the role that landscape variables play in shaping genetic diversity and population structure. While interest in this research area is growing rapidly, our ability to fully utilize landscape data, test explicit hypotheses and truly integrate these diverse disciplines has lagged behind. Part of the current challenge in the development of the field of landscape genetics is bridging the communication and knowledge gap between these highly specific and technical disciplines. The goal of this review is to help bridge this gap by exposing geneticists to terminology, sampling methods and analysis techniques widely used in landscape ecology and spatial statistics but rarely addressed in the genetics literature. We offer a definition for the term "landscape genetics", provide an overview of the landscape genetics literature, give guidelines for appropriate sampling design and useful analysis techniques, and discuss future directions in the field. We hope, this review will stimulate increased dialog and enhance interdisciplinary collaborations advancing this exciting new field.