Microplastics in Arctic polar waters: the first reported values of particles in surface and sub-surface samples 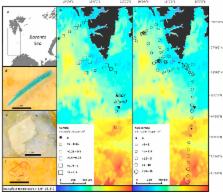 Plastic, as a form of marine litter, is found in varying quantities and sizes around the globe from surface waters to deep-sea sediments. Identifying patterns of microplastic distribution will benefit an understanding of the scale of their potential effect on the environment and organisms. As sea ice extent is reducing in the Arctic, heightened shipping and fishing activity may increase marine pollution in the area. Microplastics may enter the region following ocean transport and local input, although baseline contamination measurements are still required. Here we present the first study of microplastics in Arctic waters, south and southwest of Svalbard, Norway. Microplastics were found in surface (top 16 cm) and sub-surface (6 m depth) samples using two independent techniques. Origins and pathways bringing microplastic to the Arctic remain unclear. Particle composition (95% fibres) suggests they may either result from the breakdown of larger items (transported over large distances by prevailing currents, or derived from local vessel activity), or input in sewage and wastewater from coastal areas. Concurrent observations of high zooplankton abundance suggest a high probability for marine biota to encounter microplastics and a potential for trophic interactions. Further research is required to understand the effects of microplastic-biota interaction within this productive environment.

Special issue: Economic and Non-economic Values and Objectives in the EU’s International Trade

Occurrence of microplastics in the gastrointestinal tract of pelagic and demersal fish from the English Channel.

Walker M. McHugh,  A Lusher,  Andrew Thompson (2013)
Microplastics are present in marine habitats worldwide and laboratory studies show this material can be ingested, yet data on abundance in natural populations is limited. This study documents microplastics in 10 species of fish from the English Channel. 504 Fish were examined and plastics found in the gastrointestinal tracts of 36.5%. All five pelagic species and all five demersal species had ingested plastic. Of the 184 fish that had ingested plastic the average number of pieces per fish was 1.90±0.10. A total of 351 pieces of plastic were identified using FT-IR Spectroscopy; polyamide (35.6%) and the semi-synthetic cellulosic material, rayon (57.8%) were most common. There was no significant difference between the abundance of plastic ingested by pelagic and demersal fish. Hence, microplastic ingestion appears to be common, in relatively small quantities, across a range of fish species irrespective of feeding habitat. Further work is needed to establish the potential consequences. Copyright © 2012 Elsevier Ltd. All rights reserved.

The impact of polystyrene microplastics on feeding, function and fecundity in the marine copepod Calanus helgolandicus.

Matthew Cole,  Pennie K. Lindeque,  Elaine Fileman … (2015)
Microscopic plastic debris, termed “microplastics”, are of increasing environmental concern. Recent studies have demonstrated that a range of zooplankton, including copepods, can ingest microplastics. Copepods are a globally abundant class of zooplankton that form a key trophic link between primary producers and higher trophic marine organisms. Here we demonstrate that ingestion of microplastics can significantly alter the feeding capacity of the pelagic copepod Calanus helgolandicus. Exposed to 20 μm polystyrene beads (75 microplastics mL(–1)) and cultured algae ([250 μg C L(–1)) for 24 h, C. helgolandicus ingested 11% fewer algal cells (P = 0.33) and 40% less carbon biomass (P < 0.01). There was a net downward shift in the mean size of algal prey consumed (P < 0.001), with a 3.6 fold increase in ingestion rate for the smallest size class of algal prey (11.6–12.6 μm), suggestive of postcapture or postingestion rejection. Prolonged exposure to polystyrene microplastics significantly decreased reproductive output, but there were no significant differences in egg production rates, respiration or survival. We constructed a conceptual energetic (carbon) budget showing that microplastic-exposed copepods suffer energetic depletion over time. We conclude that microplastics impede feeding in copepods, which over time could lead to sustained reductions in ingested carbon biomass.

Fiona Murray,  Phillip Cowie (2011)
The aim of this study was to determine the extent Nephrops consumes plastics in the Clyde Sea and if this intake occurs through their diet. Plastic contamination was found to be high in Nephrops, 83% of the animals sampled contained plastics (predominately filaments) in their stomachs. Tightly tangled balls of plastic strands were found in 62% of the animals studied but were least prevalent in animals which had recently moulted. No significant difference in plastic load was observed between males and females. Raman spectroscopy indicated that some of the microfilaments identified from gut contents could be sourced to fishing waste. Nephrops fed fish seeded with strands of polypropylene rope were found to ingest but not to excrete the strands. The fishery for Norway lobster, Nephrops norvegicus, is the most valuable in Scotland and the high prevalence of plastics in Nephrops may have implications for the health of the stock. Copyright © 2011 Elsevier Ltd. All rights reserved.