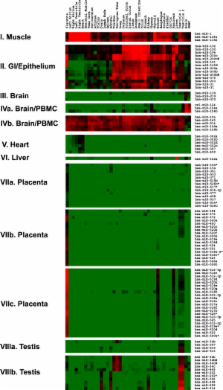 Measuring the quantity of miRNAs in tissues of different physiological and pathological conditions is an important first step to investigate the functions of miRNAs. Matched samples from normal state can provide essential baseline references to analyze the variation of miRNA abundance.

We provided expression data of 345 miRNAs in 40 normal human tissues, which identified universally expressed miRNAs, and several groups of miRNAs expressed exclusively or preferentially in certain tissue types. Many miRNAs with co-regulated expression patterns are located within the same genomic clusters, and candidate transcriptional factors that control the pattern of their expression may be identified by a comparative genomic strategy. Hierarchical clustering of normal tissues by their miRNA expression profiles basically followed the structure, anatomical locations, and physiological functions of the organs, suggesting that functions of a miRNA could be appreciated by linking to the biologies of the tissues in which it is uniquely expressed. Many predicted target genes of miRNAs that had specific reduced expression in brain and peripheral blood mononuclear cells are required for embryonic development of the nervous and hematopoietic systems based on database search.

We presented a global view of tissue distribution of miRNAs in relation to their chromosomal locations and genomic structures. We also described evidence from the cis-regulatory elements and the predicted target genes of miRNAs to support their tissue-specific functional roles to regulate the physiologies of the normal tissues in which they are expressed.

Jennifer Ashurst,  Allan Bradley,  Sam Griffiths-Jones … (2004)
To derive a global perspective on the transcription of microRNAs (miRNAs) in mammals, we annotated the genomic position and context of this class of noncoding RNAs (ncRNAs) in the human and mouse genomes. Of the 232 known mammalian miRNAs, we found that 161 overlap with 123 defined transcription units (TUs). We identified miRNAs within introns of 90 protein-coding genes with a broad spectrum of molecular functions, and in both introns and exons of 66 mRNA-like noncoding RNAs (mlncRNAs). In addition, novel families of miRNAs based on host gene identity were identified. The transcription patterns of all miRNA host genes were curated from a variety of sources illustrating spatial, temporal, and physiological regulation of miRNA expression. These findings strongly suggest that miRNAs are transcribed in parallel with their host transcripts, and that the two different transcription classes of miRNAs ('exonic' and 'intronic') identified here may require slightly different mechanisms of biogenesis.

Koichi Kobayashi,  Julja Burchard,  Peter Linsley … (2003)
RNA interference is thought to require near-identity between the small interfering RNA (siRNA) and its cognate mRNA. Here, we used gene expression profiling to characterize the specificity of gene silencing by siRNAs in cultured human cells. Transcript profiles revealed siRNA-specific rather than target-specific signatures, including direct silencing of nontargeted genes containing as few as eleven contiguous nucleotides of identity to the siRNA. These results demonstrate that siRNAs may cross-react with targets of limited sequence similarity.

Scott Baskerville,  David Bartel (2005)
MicroRNAs (miRNAs) are short endogenous RNAs known to post-transcriptionally repress gene expression in animals and plants. A microarray profiling survey revealed the expression patterns of 175 human miRNAs across 24 different human organs. Our results show that proximal pairs of miRNAs are generally coexpressed. In addition, an abrupt transition in the correlation between pairs of expressed miRNAs occurs at a distance of 50 kb, implying that miRNAs separated by <50 kb typically derive from a common transcript. Some microRNAs are within the introns of host genes. Intronic miRNAs are usually coordinately expressed with their host gene mRNA, implying that they also generally derive from a common transcript, and that in situ analyses of host gene expression can be used to probe the spatial and temporal localization of intronic miRNAs.