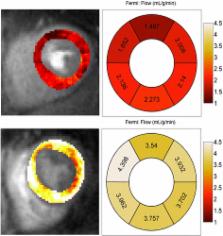 Preliminary semi-quantitative cardiovascular magnetic resonance (CMR) perfusion studies have demonstrated reduced myocardial perfusion reserve (MPR) in patients with angina and risk factors for microvascular disease (MVD), however fully quantitative CMR has not been studied. The purpose of this study is to evaluate whether fully quantitative CMR identifies reduced MPR in this population, and to investigate the relationship between epicardial atherosclerosis, left ventricular hypertrophy (LVH), extracellular volume (ECV), and perfusion.

Stress myocardial perfusion and MPR as measured by fully quantitative CMR perfusion imaging are reduced in subjects with risk factors for MVD with no obstructive CAD as compared to healthy controls. Neither myocardial hypertrophy nor fibrosis accounts for these differences.

Filippo Crea,  Paolo Camici,  Cathleen Bairey Merz (2014)
Many patients undergoing coronary angiography because of chest pain syndromes, believed to be indicative of obstructive atherosclerosis of the epicardial coronary arteries, are found to have normal angiograms. In the past two decades, a number of studies have reported that abnormalities in the function and structure of the coronary microcirculation may occur in patients without obstructive atherosclerosis, but with risk factors or with myocardial diseases as well as in patients with obstructive atherosclerosis; furthermore, coronary microvascular dysfunction (CMD) can be iatrogenic. In some instances, CMD represents an epiphenomenon, whereas in others it is an important marker of risk or may even contribute to the pathogenesis of cardiovascular and myocardial diseases, thus becoming a therapeutic target. This review article provides an update on the clinical relevance of CMD in different clinical settings and also the implications for therapy.

Association between coronary vascular dysfunction and cardiac mortality in patients with and without diabetes mellitus.

Jon Hainer,  J. Klein,  Ron Blankstein … (2012)
Diabetes mellitus increases the risk of adverse cardiac outcomes and is considered a coronary artery disease (CAD) equivalent. We examined whether coronary vascular dysfunction, an early manifestation of CAD, accounts for increased risk among diabetics compared with nondiabetics. A total of 2783 consecutive patients (1172 diabetics and 1611 nondiabetics) underwent quantification of coronary flow reserve (CFR; CFR=stress divided by rest myocardial blood flow) by positron emission tomography and were followed up for a median of 1.4 years (quartile 1-3, 0.7-3.2 years). The primary end point was cardiac death. Impaired CFR (below the median) was associated with an adjusted 3.2- and 4.9-fold increase in the rate of cardiac death for diabetics and nondiabetics, respectively (P=0.0004). Addition of CFR to clinical and imaging risk models improved risk discrimination for both diabetics and nondiabetics (c index, 0.77-0.79, P=0.04; 0.82-0.85, P=0.03, respectively). Diabetic patients without known CAD with impaired CFR experienced a rate of cardiac death comparable to that for nondiabetic patients with known CAD (2.8%/y versus 2.0%/y; P=0.33). Conversely, diabetics without known CAD and preserved CFR had very low annualized cardiac mortality, which was similar to patients without known CAD or diabetes mellitus and normal stress perfusion and systolic function (0.3%/y versus 0.5%/y; P=0.65). Coronary vasodilator dysfunction is a powerful, independent correlate of cardiac mortality among both diabetics and nondiabetics and provides meaningful incremental risk stratification. Among diabetic patients without CAD, those with impaired CFR have event rates comparable to those of patients with prior CAD, whereas those with preserved CFR have event rates comparable to those of nondiabetics.