The Achilles’ heel of senescent cells: from transcriptome to senolytic drugs 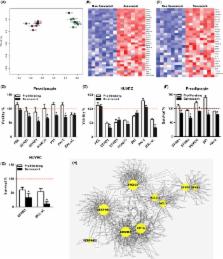 The healthspan of mice is enhanced by killing senescent cells using a transgenic suicide gene. Achieving the same using small molecules would have a tremendous impact on quality of life and the burden of age-related chronic diseases. Here, we describe the rationale for identification and validation of a new class of drugs termed senolytics, which selectively kill senescent cells. By transcript analysis, we discovered increased expression of pro-survival networks in senescent cells, consistent with their established resistance to apoptosis. Using siRNA to silence expression of key nodes of this network, including ephrins (EFNB1 or 3), PI3Kδ, p21, BCL-xL, or plasminogen-activated inhibitor-2, killed senescent cells, but not proliferating or quiescent, differentiated cells. Drugs targeting these same factors selectively killed senescent cells. Dasatinib eliminated senescent human fat cell progenitors, while quercetin was more effective against senescent human endothelial cells and mouse BM-MSCs. The combination of dasatinib and quercetin was effective in eliminating senescent MEFs. In vivo, this combination reduced senescent cell burden in chronologically aged, radiation-exposed, and progeroid Ercc1 −/Δ mice. In old mice, cardiac function and carotid vascular reactivity were improved 5 days after a single dose. Following irradiation of one limb in mice, a single dose led to improved exercise capacity for at least 7 months following drug treatment. Periodic drug administration extended healthspan in Ercc1 −/Δ mice, delaying age-related symptoms and pathology, osteoporosis, and loss of intervertebral disk proteoglycans. These results demonstrate the feasibility of selectively ablating senescent cells and the efficacy of senolytics for alleviating symptoms of frailty and extending healthspan.

Senescence and tumour clearance is triggered by p53 restoration in murine liver carcinomas.

Wen-Xue Li,  Lars Zender,  Cornelius Miething … (2007)
Although cancer arises from a combination of mutations in oncogenes and tumour suppressor genes, the extent to which tumour suppressor gene loss is required for maintaining established tumours is poorly understood. p53 is an important tumour suppressor that acts to restrict proliferation in response to DNA damage or deregulation of mitogenic oncogenes, by leading to the induction of various cell cycle checkpoints, apoptosis or cellular senescence. Consequently, p53 mutations increase cell proliferation and survival, and in some settings promote genomic instability and resistance to certain chemotherapies. To determine the consequences of reactivating the p53 pathway in tumours, we used RNA interference (RNAi) to conditionally regulate endogenous p53 expression in a mosaic mouse model of liver carcinoma. We show that even brief reactivation of endogenous p53 in p53-deficient tumours can produce complete tumour regressions. The primary response to p53 was not apoptosis, but instead involved the induction of a cellular senescence program that was associated with differentiation and the upregulation of inflammatory cytokines. This program, although producing only cell cycle arrest in vitro, also triggered an innate immune response that targeted the tumour cells in vivo, thereby contributing to tumour clearance. Our study indicates that p53 loss can be required for the maintenance of aggressive carcinomas, and illustrates how the cellular senescence program can act together with the innate immune system to potently limit tumour growth.

Control of apoptosis by p53.

Scott Lowe,  Jordan S Fridman (2003)
The p53 tumor suppressor acts to integrate multiple stress signals into a series of diverse antiproliferative responses. One of the most important p53 functions is its ability to activate apoptosis, and disruption of this process can promote tumor progression and chemoresistance. p53 apparently promotes apoptosis through transcription-dependent and -independent mechanisms that act in concert to ensure that the cell death program proceeds efficiently. Moreover, the apoptotic activity of p53 is tightly controlled, and is influenced by a series of quantitative and qualitative events that influence the outcome of p53 activation. Interestingly, other p53 family members can also promote apoptosis, either in parallel or in concert with p53. Although incomplete, our current understanding of p53 illustrates how apoptosis can be integrated into a larger tumor suppressor network controlled by different signals, environmental factors, and cell type. Understanding this network in more detail will provide insights into cancer and other diseases, and will identify strategies to improve their therapeutic treatment.