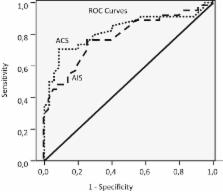 The study examined the Lp-PLA 2 activity at the patients presented to the emergency department with acute coronary syndrome (ACS) or acute ischemic stroke (AIS), as well as its diagnostic value.

The prospective study included consecutive male and female patients aged >18 years that presented to the our emergency department with ACS or AIS between November 2009 and January 2010. Blood samples were obtained immediately following diagnosis in the ACS and AIS groups. The diagnostic value of Lp-PLA 2 was determined based on receiver operating characteristic curves, sensitivity, specificity, predictive values, likelihood ratios and accuracy rates.

Lipoprotein-associated phospholipase A2 and risk of coronary disease, stroke, and mortality: collaborative analysis of 32 prospective studies

(2010)
Summary Background Lipoprotein-associated phospholipase A2 (Lp-PLA2), an inflammatory enzyme expressed in atherosclerotic plaques, is a therapeutic target being assessed in trials of vascular disease prevention. We investigated associations of circulating Lp-PLA2 mass and activity with risk of coronary heart disease, stroke, and mortality under different circumstances. Methods With use of individual records from 79 036 participants in 32 prospective studies (yielding 17 722 incident fatal or non-fatal outcomes during 474 976 person-years at risk), we did a meta-analysis of within-study regressions to calculate risk ratios (RRs) per 1 SD higher value of Lp-PLA2 or other risk factor. The primary outcome was coronary heart disease. Findings Lp-PLA2 activity and mass were associated with each other (r=0·51, 95% CI 0·47–0·56) and proatherogenic lipids. We noted roughly log-linear associations of Lp-PLA2 activity and mass with risk of coronary heart disease and vascular death. RRs, adjusted for conventional risk factors, were: 1·10 (95% CI 1·05–1·16) with Lp-PLA2 activity and 1·11 (1·07–1·16) with Lp-PLA2 mass for coronary heart disease; 1·08 (0·97–1·20) and 1·14 (1·02–1·27) for ischaemic stroke; 1·16 (1·09–1·24) and 1·13 (1·05–1·22) for vascular mortality; and 1·10 (1·04–1·17) and 1·10 (1·03–1·18) for non-vascular mortality, respectively. RRs with Lp-PLA2 did not differ significantly in people with and without initial stable vascular disease, apart from for vascular death with Lp-PLA2 mass. Adjusted RRs for coronary heart disease were 1·10 (1·02–1·18) with non-HDL cholesterol and 1·10 (1·00–1·21) with systolic blood pressure. Interpretation Lp-PLA2 activity and mass each show continuous associations with risk of coronary heart disease, similar in magnitude to that with non-HDL cholesterol or systolic blood pressure in this population. Associations of Lp-PLA2 mass and activity are not exclusive to vascular outcomes, and the vascular associations depend at least partly on lipids. Funding UK Medical Research Council, GlaxoSmithKline, and British Heart Foundation.

Role of lipoprotein-associated phospholipase A2 in atherosclerosis: biology, epidemiology, and possible therapeutic target.

Zachary Zalewski,  Colin H. Macphee (2005)
The development of atherosclerotic vascular disease is invariably linked to the formation of bioactive lipid mediators and accompanying vascular inflammation. Lipoprotein-associated phospholipase A2 (Lp-PLA2) is an enzyme that is produced by inflammatory cells, co-travels with circulating low-density lipoprotein (LDL), and hydrolyzes oxidized phospholipids in LDL. Its biological role has been controversial with initial reports purporting atheroprotective effects of Lp-PLA2 thought to be a consequence of degrading platelet-activating factor and removing polar phospholipids in modified LDL. Recent studies, however, focused on pro-inflammatory role of Lp-PLA2 mediated by products of the Lp-PLA2 reaction (lysophosphatidylcholine and oxidized nonesterified fatty acids). These bioactive lipid mediators, which are generated in lesion-prone vasculature and to a lesser extent in the circulation (eg, in electronegative LDL), are known to elicit several inflammatory responses. The proinflammatory action of Lp-PLA2 is also supported by a number of epidemiology studies suggesting that the circulating level of the enzyme is an independent predictor of cardiovascular events, despite some attenuation of the effect by inclusion of LDL, the primary carrier of Lp-PLA2, in the analysis. These observations provide a rationale to explore whether inhibiting Lp-PLA2 activity and consequent interference with the formation of bioactive lipid mediators will abrogate inflammation associated with atherosclerosis, produce favorable changes in intermediate cardiovascular end points (eg, biomarkers, imaging, and endothelial function), and ultimately reduce cardiovascular events in high-risk patients.