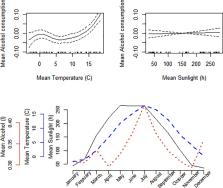 Alcohol is a major risk factor for liver cirrhosis. Recently, it was proposed that colder climate might causally lead to increased consumption of alcohol.

We found no association between a colder climate and increased alcohol consumption. Socio-economic factors are likely to explain the suggested association.

Meritxell Ventura-Cots,  Ariel Watts,  Monica Cruz-Lemini … (2018)
Risk of alcoholic cirrhosis is determined by genetic and environmental factors. We aimed to investigate if climate has a causal effect on alcohol consumption and its weight on alcoholic cirrhosis. We collected extensive data from 193 sovereign countries as well as 50 states and 3,144 counties in the United States. Data sources included World Health Organization, World Meteorological Organization, and the Institute on Health Metrics and Evaluation. Climate parameters comprised Koppen-Geiger classification, average annual sunshine hours, and average annual temperature. Alcohol consumption data, pattern of drinking, health indicators, and alcohol-attributable fraction (AAF) of cirrhosis were obtained. The global cohort revealed an inverse correlation between mean average temperature and average annual sunshine hours with liters of annual alcohol consumption per capita (Spearman's rho -0.5 and -0.57, respectively). Moreover, the percentage of heavy episodic drinking and total drinkers among population inversely correlated with temperature -0.45 and -0.49 (P < 0.001) and sunshine hours -0.39 and -0.57 (P < 0.001). Importantly, AAF was inversely correlated with temperature -0.45 (P < 0.001) and sunshine hours -0.6 (P < 0.001). At a global level, all included parameters in the univariable and multivariable analysis showed an association with liters of alcohol consumption and drinkers among population once adjusted by potential confounders. In the multivariate analysis, liters of alcohol consumption associated with AAF. In the United States, colder climates showed a positive correlation with the age-standardized prevalence of heavy and binge drinkers. Conclusion: These results suggest that colder climates may play a causal role on AAF mediated by alcohol consumption.