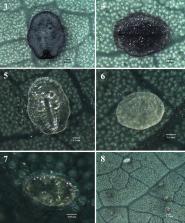 A new whitefly species, Aleuroclava schimae Wang, sp. nov. infesting leaves of Schima superba ( Parietales , Theaceae ) is described and illustrated from Zhejiang, China. Puparia of the new species are elliptical, broad at the transverse molting suture region and broadly truncate posteriorly. Thoracic and caudal tracheal pores are discernible. In life, the puparia are covered by a thin layer of white wax.

Rui Zhang,  Hanbo Yang,  Zhichun Zhou … (2019)
Background Schima superba (Theaceae) is a popular woody tree in China. The obscure chromosomal characters of this species are a limitation in the development of high-density genetic linkage maps, which are valuable resources for molecular breeding and functional genomics. Results We determined the chromosome number and the karyotype of S. superba as 2n = 36 = 36 m, which is consistent with the tribe Schimeae (n = 18). A high-density genetic map was constructed using genotyping by sequencing (GBS). A F1 full-sib with 116 individuals and their parents (LC31 × JO32) were sequenced on the Illumina HiSeq™ platform. Overall, 343.3 Gb of raw data containing 1,191,933,474 paired-end reads were generated. Based on this, 99,966 polymorphic SNP markers were developed from the parents, and 2209 markers were mapped onto the integrated genetic linkage map after data filtering and SNP genotyping. The map spanned 2076.24 cM and was distributed among 18 linkage groups. The average marker interval was 0.94 cM. A total of 168 quantitative trait loci (QTLs) for 14 growth traits were identified. Conclusions The chromosome number and karyotype of S. superba was 2n = 36 = 36 m and a linkage map with 2209 SNP markers was constructed to identify QTLs for growth traits. Our study provides a basis for molecular-assisted breeding and genomic studies, which will contribute towards the future research and genetic improvement of S. superba. Electronic supplementary material The online version of this article (10.1186/s12870-019-1655-8) contains supplementary material, which is available to authorized users.

Description of a new species of Aleuroclava Singh (Hemiptera: Aleyrodidae) from China.