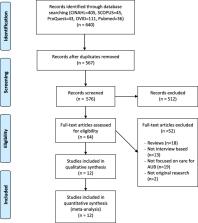 Although Abnormal Uterine Bleeding (AUB) can have serious medical consequences and significantly impacts daily life, the overall trend is that most women do not seek care for these symptoms. The objective of this review was to synthesise factors impeding women’s access care for AUB.

Systematic literature review of qualitative studies (interview and focus group) regarding the lived in experiences of women with abnormal menstrual symptoms, followed by a thematic analysis of these studies. We screened CINAHL, SCOPUS, ProQuest, OVID and Pubmed for qualitative studies. Studies were assessed using the Clinical Appraisal Skills Programme checklist and thematic synthesis was used to develop themes from the findings of the studies.

The review yielded 12 studies that satisfied the inclusion criteria. Three themes were developed that described barriers for women seeking care for AUB: health literacy (understanding of normal periods, role of cervical Pap smears and lack of access to appropriate information), taboo/normalisation (fear and embarrassment of symptoms, prioritising others) and health care provider (lack of accessible and trusted female GPs and poor experiences with GPs).

For 20 years women have consistently reported poor experiences in accessing care for AUB. The findings from our review indicate that drivers to impeding access are multiple; therefore any approaches to improve access will need to be multi-level – from comprising local sociocultural considerations to improved GP training.

Ceridwen Fraser,  Hilary O. D. Critchley,  Michael Broder … (2011)
There is general inconsistency in the nomenclature used to describe abnormal uterine bleeding (AUB), in addition to a plethora of potential causes-several of which may coexist in a given individual. It seems clear that the development of consistent and universally accepted nomenclature is a step toward rectifying this unsatisfactory circumstance. Another requirement is the development of a classification system, on several levels, for the causes of AUB, which can be used by clinicians, investigators, and even patients to facilitate communication, clinical care, and research. This manuscript describes an ongoing process designed to achieve these goals, and presents for consideration the PALM-COEIN (polyp; adenomyosis; leiomyoma; malignancy and hyperplasia; coagulopathy; ovulatory dysfunction; endometrial; iatrogenic; and not yet classified) classification system for AUB, which has been approved by the International Federation of Gynecology and Obstetrics (FIGO) Executive Board as a FIGO classification system. Copyright © 2011. Published by Elsevier Ireland Ltd.

What's the delay? A qualitative study of women's experiences of reaching a diagnosis of endometriosis.

Jeremy Wright,  K Ballard,  Karen Lowton (2006)
To investigate the reasons women experience delays in the diagnosis of endometriosis and the impact of this. A qualitative interview-based study of 32 women, 28 of whom were subsequently diagnosed with endometriosis. Southeast England. Women attending a pelvic pain clinic. Semistructured interviews. Women's reported experiences of being diagnosed with endometriosis. Delays in the diagnosis of endometriosis occur at an individual patient level and a medical level, as both women and family doctors normalize symptoms, symptoms are suppressed through hormones, and nondiscriminatory investigations are relied upon. Women benefited from a diagnosis, because it provided a language in which to discuss their condition, offered possible management strategies to control symptoms, and provided reassurance that symptoms were not due to cancer. Diagnosis also sanctioned women's access to social support and legitimized absences from social and work obligations. Although recent guidelines for the management of chronic pelvic pain suggest that diagnostic laparoscopy may be considered a secondary investigation after the failure of therapeutic interventions, the present study highlights the importance of an early diagnosis for women who suffer at physical, emotional, and social levels when they remain undiagnosed.

Zhimei Liu,  Quan Doan,  Paul Blumenthal … (2015)
Abnormal uterine bleeding (AUB) impacts women's health-related quality of life (HRQoL) and puts a heavy economic burden on society. To date, this burden has not been systematically studied. We conducted a systematic review of the medical literature to evaluate the impact of AUB on HRQoL and to quantify the economic burden of AUB from a societal perspective. We searched the PubMed and Cochrane databases, and article bibliographies for the period up to July 2005. Teams of two reviewers independently abstracted data from studies that reported outcomes of interest: prevalence, HRQoL, work impairment, and health-care utilization and costs associated with AUB. The search yielded 1009 English-language articles. Ninety-eight studies (including randomized controlled trials, observational studies, and reviews) that met the inclusion and exclusion criteria underwent a full-text review. The prevalence of AUB among women of reproductive age ranged from 10% to 30%. The HRQoL scores from the 36-item Short-Form Health Survey Questionnaire (SF-36) suggested that women with AUB have HRQoL below the 25th percentile of that for the general female population within a similar age range. The conservatively estimated annual direct and indirect economic costs of AUB were approximately $1 billion and $12 billion, respectively. These figures do not account for intangible costs and productivity loss due to presenteeism. The burden of AUB needs further and more thorough investigation. Additional research should prospectively evaluate the impact of AUB and the value of treatment provided to help guide future health resource allocation and clinical decision-making.