A Role of Corazonin Receptor in Larval-Pupal Transition and Pupariation in the Oriental Fruit Fly Bactrocera dorsalis (Hendel) (Diptera: Tephritidae) 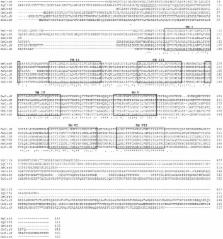 Corazonin (Crz) is a neuropeptide hormone, but also a neuropeptide modulator that is internally released within the CNS, and it has a widespread distribution in insects with diverse physiological functions. Here, we identified and cloned the cDNAs of Bactrocera dorsalis that encode Crz and its receptor CrzR. Mature BdCrz has 11 residues with a unique Ser 11 substitution (instead of the typical Asn) and a His in the evolutionary variable position 7. The BdCrzR cDNA encodes a putative protein of 608 amino acids with 7 putative transmembrane domains, typical for the structure of G-protein-coupled receptors. When expressed in Chinese hamster ovary (CHO) cells, the BdCrzR exhibited a high sensitivity and selectivity for Crz (EC 50 ≈ 52.5 nM). With qPCR, the developmental stage and tissue-specific expression profiles in B. dorsalis demonstrated that both BdCrz and BdCrzR were highly expressed in the larval stage, and BdCrzR peaked in 2-day-old 3rd-instar larvae, suggesting that the BdCrzR may play an important role in the larval-pupal transition behavior. Immunochemical localization confirmed the production of Crz in the central nervous system (CNS), specifically by a group of three neurons in the dorso-lateral protocerebrum and eight pairs of lateral neurons in the ventral nerve cord. qPCR analysis located the BdCrzR in both the CNS and epitracheal gland, containing the Inka cells. Importantly, dsRNA- BdCrzR-mediated gene-silencing caused a delay in larval-pupal transition and pupariation, and this phenomenon agreed with a delayed expression of tyrosine hydroxylase and dopa-decarboxylase genes. We speculate that CrzR-silencing blocked dopamine synthesis, resulting in the inhibition of pupariation and cuticular melanization. Finally, injection of Crz in head-ligated larvae could rescue the effects. These findings provide a new insight into the roles of Crz signaling pathway components in B. dorsalis and support an important role of CrzR in larval-pupal transition and pupariation behavior.

Drosophila neuropeptides in regulation of physiology and behavior.

Dick Nässel,  Åsa M.E. Winther (2010)
Studies of neuropeptide and peptide hormone signaling are coming of age in Drosophila due to rapid developments in molecular genetics approaches that overcome the difficulties caused by the small size of the fly. In addition we have genome-wide information on genes involved in peptide signaling, and growing pools of peptidomics data. A large number of different neuropeptides has been identified in a huge variety of neuron types in different parts of the Drosophila nervous system and cells in other locations. This review addresses questions related to peptidergic signaling in the Drosophila nervous system, especially how peptides regulate physiology and behavior during development and in the mature fly. We first summarize novel findings on neuropeptide precursor genes, processed bioactive peptides and their cognate receptors. Thereafter we provide an overview of the physiological and behavioral roles of peptide signaling in Drosophila. These roles include regulation of development, growth, feeding, metabolism, reproduction, homeostasis, and longevity, as well as neuromodulation in learning and memory, olfaction and locomotor control. The substrate of this signaling is the peptide products of about 42 precursor genes expressed in different combinations in a variety of neuronal circuits or that act as circulating hormones. Approximately 45 G-protein-coupled peptide receptors are known in Drosophila and for most of these the ligands have been identified. Functions of some peptides are better understood than others, and much work remains to reveal the spectrum of roles neuropeptides and peptide hormones play in the daily life of a fly. Copyright 2010 Elsevier Ltd. All rights reserved.

Y. Park,  Y-J Kim,  M Adams (2002)
G-protein coupled receptors (GPCRs) are ancient, ubiquitous sensors vital to environmental and physiological signaling throughout organismal life. With the publication of the Drosophila genome, numerous "orphan" GPCRs have become available for functional analysis. Here we characterize two groups of GPCRs predicted as receptors for peptides with a C-terminal amino acid sequence motif consisting of -PRXamide (PRXa). Assuming ligand-receptor coevolution, two alternative hypotheses were constructed and tested. The insect PRXa peptides are evolutionarily related to the vertebrate peptide neuromedin U (NMU), or are related to arginine vasopressin (AVP), both of which have PRXa motifs. Seven Drosophila GPCRs related to receptors for NMU and AVP were cloned and expressed in Xenopus oocytes for functional analysis. Four Drosophila GPCRs in the NMU group (CG14575 [corrected], CG8795, CG9918, CG8784) are activated by insect PRXa pyrokinins, (-FXPRXamide), Cap2b-like peptides (-FPRXamide), or ecdysis triggering hormones (-PRXamide). Three Drosophila GPCRs in the vasopressin receptor group respond to crustacean cardioactive peptide (CCAP), corazonin, or adipokinetic hormone (AKH), none of which are PRXa peptides. These findings support a theory of coevolution for NMU and Drosophila PRXa peptides and their respective receptors.

This article was submitted to Invertebrate Physiology, a section of the journal Frontiers in Physiology