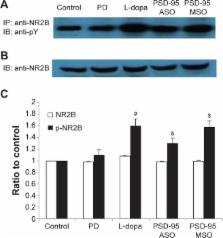 Abnormality in interactions between N-methyl-d-aspartate (NMDA) receptor and its signaling molecules occurs in the lesioned striatum in Parkinson’s disease (PD) and levodopa-induced dyskinesia (LID). It was reported that Fyn-mediated NR2B tyrosine phosphorylation, can enhance NMDA receptor function. Postsynaptic density protein 95 (PSD-95), one of the synapse-associated proteins, regulates interactions between receptor and downstream-signaling molecules. In light of the relationship between PSD-95, NR2B, and Fyn kinases, does PSD-95 contribute to the overactivity of NMDA receptor function induced by dopaminergic treatment? To further prove the possibility, the effects of regulating the PSD-95 expression on the augmented NR2B tyrosine phosphorylation and on the interactions of Fyn and NR2B in LID rat models were evaluated.

In the present study, parkinsonian rat models were established by injecting 6-hydroxydopamine. Subsequently, valid PD rats were treated with levodopa (50 mg/kg/day with benserazide 12.5 mg/kg/day, twice daily) intraperitoneally for 22 days to create LID rat models. Then, the effect of pretreatment with an intrastriatal injection of the PSD-95mRNA antisense oligonucleotides (PSD-95 ASO) on the rotational response to levodopa challenge was assessed. The effects of pretreatment with an intrastriatal injection of PSD-95 ASO on the augmented NR2B tyrosine phosphorylation and interactions of Fyn with NR2B in the LID rat models were detected by immunoblotting and immunoprecipitation.

Levodopa administration twice daily for 22 days to parkinsonian rats shortened the rotational duration and increased the peak turning responses. The altered rotational responses were attenuated by PSD-95 ASO pretreatment. Meanwhile, PSD-95 ASO pretreatment decreased the level of PSD-95 protein expression and reduced both the augmented NR2B tyrosine phosphorylation and interactions of Fyn with NR2B triggered during the levodopa administration in the lesioned striatum of PD rats. However, the protein levels of Fyn and NR2B showed no difference under the above conditions.

The data demonstrate that the inhibition of PSD-95 protein expression suppressed the interactions of Fyn with NR2B and NR2B tyrosine phosphorylation and subsequently downregulated NMDA receptor overactivation, thus providing benefit for the therapy of LID. Therefore, PSD-95 is important for overactivity of NMDA receptor function due to facilitating NR2B tyrosine phosphorylation dependent on Fyn kinase by regulating interactions of Fyn with NR2B under the pathological conditions of LID.

Morgan Sheng,  Jong Kim (2002)
In excitatory synapses of the brain, specific receptors in the postsynaptic membrane lie ready to respond to the release of the neurotransmitter glutamate from the presynaptic terminal. Upon stimulation, these glutamate receptors activate multiple biochemical pathways that transduce signals into the postsynaptic neuron. Different kinds of synaptic activity elicit different patterns of postsynaptic signals that lead to short- or long-lasting strengthening or weakening of synaptic transmission. The complex molecular mechanisms that underlie postsynaptic signaling and plasticity are beginning to emerge.

Targeting of PKA to glutamate receptors through a MAGUK-AKAP complex.

M Colledge,  L Langeberg,  R L Huganir … (2000)
Compartmentalization of glutamate receptors with the signaling enzymes that regulate their activity supports synaptic transmission. Two classes of binding proteins organize these complexes: the MAGUK proteins that cluster glutamate receptors and AKAPs that anchor kinases and phosphatases. In this report, we demonstrate that glutamate receptors and PKA are recruited into a macromolecular signaling complex through direct interaction between the MAGUK proteins, PSD-95 and SAP97, and AKAP79/150. The SH3 and GK regions of the MAGUKs mediate binding to the AKAP. Cell-based studies indicate that phosphorylation of AMPA receptors is enhanced by a SAP97-AKAP79 complex that directs PKA to GluR1 via a PDZ domain interaction. As AMPA receptor phosphorylation is implicated in regulating synaptic plasticity, these data suggest that a MAGUK-AKAP complex may be centrally involved.

Composition of the synaptic PSD-95 complex.

Anthony J Makusky,  James Slotta,  Ayse Dosemeci … (2007)
Postsynaptic density protein 95 (PSD-95), a specialized scaffold protein with multiple protein interaction domains, forms the backbone of an extensive postsynaptic protein complex that organizes receptors and signal transduction molecules at the synaptic contact zone. Large, detergent-insoluble PSD-95-based postsynaptic complexes can be affinity-purified from conventional PSD fractions using magnetic beads coated with a PSD-95 antibody. In the present study purified PSD-95 complexes were analyzed by LC/MS/MS. A semiquantitative measure of the relative abundances of proteins in the purified PSD-95 complexes and the parent PSD fraction was estimated based on the cumulative ion current intensities of corresponding peptides. The affinity-purified preparation was largely depleted of presynaptic proteins, spectrin, intermediate filaments, and other contaminants prominent in the parent PSD fraction. We identified 525 of the proteins previously reported in parent PSD fractions, but only 288 of these were detected after affinity purification. We discuss 26 proteins that are major components in the PSD-95 complex based upon abundance ranking and affinity co-purification with PSD-95. This subset represents a minimal list of constituent proteins of the PSD-95 complex and includes, in addition to the specialized scaffolds and N-methyl-d-aspartate (NMDA) receptors, an abundance of alpha-amino-3-hydroxy-5-methyl-4-isoxazolepropionic acid (AMPA) receptors, small G-protein regulators, cell adhesion molecules, and hypothetical proteins. The identification of two Arf regulators, BRAG1 and BRAG2b, as co-purifying components of the complex implies pivotal functions in spine plasticity such as the reorganization of the actin cytoskeleton and insertion and retrieval of proteins to and from the plasma membrane. Another co-purifying protein (Q8BZM2) with two sterile alpha motif domains may represent a novel structural core element of the PSD.