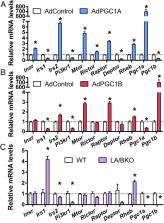 The liver plays crucial roles in the control of glucose homeostasis during the fast-feeding cycle. It responds to insulin and glucagon to either store or provide glucose to other organs. Insulin resistance is a hallmark of metabolic diseases such as type 2 diabetes and nonalcoholic fatty liver disease. Associations have been made between low hepatic levels of peroxisome proliferator-activated receptor gamma coactivator 1-alpha (PGC1A) and hepatic insulin resistance, but underlying mechanisms are elusive. We show that PGC1A controls the hepatic ratio of Insulin Receptor Substrates 1 (IRS1) and IRS2 expression, crucial for defining the precise insulin signal in hepatocytes to respond to fasting and feeding. Importantly, PGC1A is key for insulin-mediated suppression of hepatic glucose production.

Precise modulation of hepatic glucose metabolism is crucial during the fasting and feeding cycle and is controlled by the actions of circulating insulin and glucagon. The insulin-signaling pathway requires insulin receptor substrate 1 (IRS1) and IRS2, which are found to be dysregulated in diabetes and obesity. The peroxisome proliferator-activated receptor gamma coactivator 1-alpha (PGC1A) is a fasting-induced transcriptional coactivator. In nonalcoholic fatty liver disease and in patients with type 2 diabetes, low hepatic PGC1A levels are associated with insulin resistance. However, how PGC1A activity impacts the hepatic insulin-signaling pathway is still unclear. We used gain- and loss-of-function models in mouse primary hepatocytes and measured hepatocyte insulin response by gene and protein expression and ex vivo glucose production. We found that the PGC1A level determines the relative ratio of IRS1 and IRS2 in hepatocytes, impacting insulin receptor signaling via protein kinase B/AKT (AKT). PGC1A drove the expression of IRS2 downstream of glucagon signaling while simultaneously reducing IRS1 expression. We illustrate that glucagon- or PGC1A-induced IRS2 expression was dependent on cAMP Response Element Binding Protein activity and that this was essential for suppression of hepatocyte gluconeogenesis in response to insulin in vitro. We also show that increased hepatic PGC1A improves glucose homeostasis in vivo, revealing a counterregulatory role for PGC1A in repressing uncontrolled glucose production in response to insulin signaling. These data highlight a mechanism by which PGC1A plays dual roles in the control of gluconeogenesis during the fasting-to-fed transition through regulated balance between IRS1 and IRS2 expression.

Christopher Rodgers,  Francisca Vázquez,  Daniel Arlow … (2007)
Transcriptional complexes that contain peroxisome-proliferator-activated receptor coactivator (PGC)-1alpha control mitochondrial oxidative function to maintain energy homeostasis in response to nutrient and hormonal signals. An important component in the energy and nutrient pathways is mammalian target of rapamycin (mTOR), a kinase that regulates cell growth, size and survival. However, it is unknown whether and how mTOR controls mitochondrial oxidative activities. Here we show that mTOR is necessary for the maintenance of mitochondrial oxidative function. In skeletal muscle tissues and cells, the mTOR inhibitor rapamycin decreased the gene expression of the mitochondrial transcriptional regulators PGC-1alpha, oestrogen-related receptor alpha and nuclear respiratory factors, resulting in a decrease in mitochondrial gene expression and oxygen consumption. Using computational genomics, we identified the transcription factor yin-yang 1 (YY1) as a common target of mTOR and PGC-1alpha. Knockdown of YY1 caused a significant decrease in mitochondrial gene expression and in respiration, and YY1 was required for rapamycin-dependent repression of those genes. Moreover, mTOR and raptor interacted with YY1, and inhibition of mTOR resulted in a failure of YY1 to interact with and be coactivated by PGC-1alpha. We have therefore identified a mechanism by which a nutrient sensor (mTOR) balances energy metabolism by means of the transcriptional control of mitochondrial oxidative function. These results have important implications for our understanding of how these pathways might be altered in metabolic diseases and cancer.

R. Shaw (2009)
The AMP-activated serine/threonine protein kinase (AMPK) is a sensor of cellular energy status found in all eukaryotes that is activated under conditions of low intracellular ATP following stresses such as nutrient deprivation or hypoxia. In the past 5 years, work from a large number of laboratories has revealed that one of the major downstream signalling pathways regulated by AMPK is the mammalian target-of-rapamycin [mammalian target of rapamycin (mTOR) pathway]. Interestingly, like AMPK, the mTOR serine/threonine kinase plays key roles not only in growth control and cell proliferation but also in metabolism. Recent work has revealed that across eukaryotes mTOR orthologues are found in two biochemically distinct complexes and only one of those complexes (mTORC1 in mammals) is acutely sensitive to rapamycin and regulated by nutrients and AMPK. Many details of the molecular mechanism by which AMPK inhibits mTORC1 signalling have also been decoded in the past 5 years. AMPK directly phosphorylates at least two proteins to induce rapid suppression of mTORC1 activity, the TSC2 tumour suppressor and the critical mTORC1 binding subunit raptor. Here we explore the molecular connections between AMPK and mTOR signalling pathways and examine the physiological processes in which AMPK regulation of mTOR is critical for growth or metabolic control. The functional conservation of AMPK and TOR in all eukaryotes, and the sequence conservation around the AMPK phosphorylation sites in raptor across all eukaryotes examined suggest that this represents a fundamental cell growth module connecting nutrient status to the cell growth machinery. These findings have broad implications for the control of cell growth by nutrients in a number of cellular and organismal contexts.