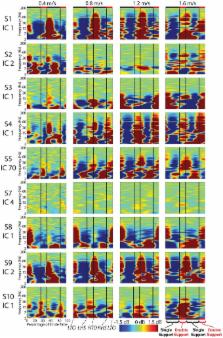 There has been a recent surge in the use of electroencephalography (EEG) as a tool for mobile brain imaging due to its portability and fine time resolution. When EEG is combined with independent component analysis (ICA) and source localization techniques, it can model electrocortical activity as arising from temporally independent signals located in spatially distinct cortical areas. However, for mobile tasks, it is not clear how movement artifacts influence ICA and source localization. We devised a novel method to collect pure movement artifact data (devoid of any electrophysiological signals) with a 256-channel EEG system. We first blocked true electrocortical activity using a silicone swim cap. Over the silicone layer, we placed a simulated scalp with electrical properties similar to real human scalp. We collected EEG movement artifact signals from ten healthy, young subjects wearing this setup as they walked on a treadmill at speeds from 0.4–1.6 m/s. We performed ICA and dipole fitting on the EEG movement artifact data to quantify how accurately these methods would identify the artifact signals as non-neural. ICA and dipole fitting accurately localized 99% of the independent components in non-neural locations or lacked dipolar characteristics. The remaining 1% of sources had locations within the brain volume and low residual variances, but had topographical maps, power spectra, time courses, and event related spectral perturbations typical of non-neural sources. Caution should be exercised when interpreting ICA for data that includes semi-periodic artifacts including artifact arising from human walking. Alternative methods are needed for the identification and separation of movement artifact in mobile EEG signals, especially methods that can be performed in real time. Separating true brain signals from motion artifact could clear the way for EEG brain computer interfaces for assistance during mobile activities, such as walking.

G. Pfurtscheller,  F.H. Lopes da Silva (1999)
An internally or externally paced event results not only in the generation of an event-related potential (ERP) but also in a change in the ongoing EEG/MEG in form of an event-related desynchronization (ERD) or event-related synchronization (ERS). The ERP on the one side and the ERD/ERS on the other side are different responses of neuronal structures in the brain. While the former is phase-locked, the latter is not phase-locked to the event. The most important difference between both phenomena is that the ERD/ERS is highly frequency band-specific, whereby either the same or different locations on the scalp can display ERD and ERS simultaneously. Quantification of ERD/ERS in time and space is demonstrated on data from a number of movement experiments.

Wolfgang Klimesch (1999)
Evidence is presented that EEG oscillations in the alpha and theta band reflect cognitive and memory performance in particular. Good performance is related to two types of EEG phenomena (i) a tonic increase in alpha but a decrease in theta power, and (ii) a large phasic (event-related) decrease in alpha but increase in theta, depending on the type of memory demands. Because alpha frequency shows large interindividual differences which are related to age and memory performance, this double dissociation between alpha vs. theta and tonic vs. phasic changes can be observed only if fixed frequency bands are abandoned. It is suggested to adjust the frequency windows of alpha and theta for each subject by using individual alpha frequency as an anchor point. Based on this procedure, a consistent interpretation of a variety of findings is made possible. As an example, in a similar way as brain volume does, upper alpha power increases (but theta power decreases) from early childhood to adulthood, whereas the opposite holds true for the late part of the lifespan. Alpha power is lowered and theta power enhanced in subjects with a variety of different neurological disorders. Furthermore, after sustained wakefulness and during the transition from waking to sleeping when the ability to respond to external stimuli ceases, upper alpha power decreases, whereas theta increases. Event-related changes indicate that the extent of upper alpha desynchronization is positively correlated with (semantic) long-term memory performance, whereas theta synchronization is positively correlated with the ability to encode new information. The reviewed findings are interpreted on the basis of brain oscillations. It is suggested that the encoding of new information is reflected by theta oscillations in hippocampo-cortical feedback loops, whereas search and retrieval processes in (semantic) long-term memory are reflected by upper alpha oscillations in thalamo-cortical feedback loops. Copyright 1999 Elsevier Science B.V.

Terrence Sejnowski,  T. Jung,  Hope Humphries … (2000)
Eye movements, eye blinks, cardiac signals, muscle noise, and line noise present serious problems for electroencephalographic (EEG) interpretation and analysis when rejecting contaminated EEG segments results in an unacceptable data loss. Many methods have been proposed to remove artifacts from EEG recordings, especially those arising from eye movements and blinks. Often regression in the time or frequency domain is performed on parallel EEG and electrooculographic (EOG) recordings to derive parameters characterizing the appearance and spread of EOG artifacts in the EEG channels. Because EEG and ocular activity mix bidirectionally, regressing out eye artifacts inevitably involves subtracting relevant EEG signals from each record as well. Regression methods become even more problematic when a good regressing channel is not available for each artifact source, as in the case of muscle artifacts. Use of principal component analysis (PCA) has been proposed to remove eye artifacts from multichannel EEG. However, PCA cannot completely separate eye artifacts from brain signals, especially when they have comparable amplitudes. Here, we propose a new and generally applicable method for removing a wide variety of artifacts from EEG records based on blind source separation by independent component analysis (ICA). Our results on EEG data collected from normal and autistic subjects show that ICA can effectively detect, separate, and remove contamination from a wide variety of artifactual sources in EEG records with results comparing favorably with those obtained using regression and PCA methods. ICA can also be used to analyze blink-related brain activity.