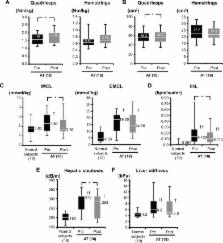 While aerobic training is generally recommended as therapeutic exercise in guidelines, the effectiveness of resistance training has recently been reported in the management of nonalcoholic fatty liver disease (NAFLD). Acceleration training (AT) is a new training method that provides a physical stimulation effect on skeletal muscles by increasing gravitational acceleration with vibration. AT has recently been indicated as a component of medicine. In this study, we evaluated the effectiveness of AT in the management of NAFLD in obese subjects.

A total of 18 obese patients with NAFLD who had no improvement in liver function test abnormalities and/or steatosis grade after 12 weeks of lifestyle counseling were enrolled in an AT program. These patients attended a 20-minute session of AT twice a week for 12 consecutive weeks.

AT reduced hepatic and intramyocellular fat contents and ameliorated liver function test abnormalities in obese patients with NAFLD, which was coupled with improved physical function and body adiposity. AT is clinically beneficial for the management of NAFLD.

Vibration as an exercise modality: how it may work, and what its potential might be.

Jörn Rittweger (2010)
Whilst exposure to vibration is traditionally regarded as perilous, recent research has focussed on potential benefits. Here, the physical principles of forced oscillations are discussed in relation to vibration as an exercise modality. Acute physiological responses to isolated tendon and muscle vibration and to whole body vibration exercise are reviewed, as well as the training effects upon the musculature, bone mineral density and posture. Possible applications in sports and medicine are discussed. Evidence suggests that acute vibration exercise seems to elicit a specific warm-up effect, and that vibration training seems to improve muscle power, although the potential benefits over traditional forms of resistive exercise are still unclear. Vibration training also seems to improve balance in sub-populations prone to fall, such as frail elderly people. Moreover, literature suggests that vibration is beneficial to reduce chronic lower back pain and other types of pain. Other future indications are perceivable.

M. K. Holten,  M Zacho,  M Gaster … (2004)
Strength training represents an alternative to endurance training for patients with type 2 diabetes. Little is known about the effect on insulin action and key proteins in skeletal muscle, and the necessary volume of strength training is unknown. A total of 10 type 2 diabetic subjects and 7 healthy men (control subjects) strength-trained one leg three times per week for 6 weeks while the other leg remained untrained. Each session lasted no more than 30 min. After strength training, muscle biopsies were obtained, and an isoglycemic-hyperinsulinemic clamp combined with arterio-femoral venous catheterization of both legs was carried out. In general, qualitatively similar responses were obtained in both groups. During the clamp, leg blood flow was higher (P < 0.05) in trained versus untrained legs, but despite this, arterio-venous extraction glucose did not decrease in trained legs. Thus, leg glucose clearance was increased in trained legs (P < 0.05) and more than explained by increases in muscle mass. Strength training increased protein content of GLUT4, insulin receptor, protein kinase B-alpha/beta, glycogen synthase (GS), and GS total activity. In conclusion, we found that strength training for 30 min three times per week increases insulin action in skeletal muscle in both groups. The adaptation is attributable to local contraction-mediated mechanisms involving key proteins in the insulin signaling cascade.

Guidelines for the assessment and management of non-alcoholic fatty liver disease in the Asia-Pacific region: executive summary.