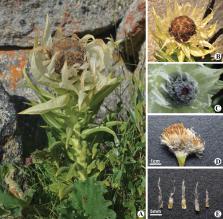 A species in the family Asteraceae , Saussurea bogedaensis , was newly described from Bogeda Mountain in Xinjiang, China and is a critically endangered species in China. Morphological and genetic characteristics confirm the presence of this species in Mongolia, as it was found in Baitag Bogd Mountain (in the Dzungarian Gobi). In addition, the distribution and conservation status of S. bogedaensis are provided.

T Stuessy,  Jessica Crawford,  T Sang (1997)
The coding region of the mat K gene and two intergenic spacers, psb A-trn H and trn L(UAA)-trn F(GAA), of cpDNA were sequenced to study phylogenetic relationships of 32 Paeonia species. In the psb A-trn H intergenic spacer, short sequences bordered by long inverted repeats have undergone inversions that are often homoplasious mutations. Insertions/deletions found in the two intergenic spacers, mostly resulting from slipped-strand mispairing, provided relatively reliable phylogenetic information. The mat K coding region, evolving more rapidly than the trnL-trn F spacer and more slowly than the psb A-trn H spacer, produced the best resolved phylogenetic tree. The mat K phylogeny was compared with the phylogeny obtained from sequences of internal transcribed spacers (ITS) of nuclear ribosomal DNA. A refined hypothesis of species phylogeny of section Paeonia was proposed by considering the discordance between the nuclear and cpDNA phylogenies to be results of hybrid speciation followed by inheritance of cpDNA of one parent and fixation of ITS sequences of another parent. The Eurasian and western North American disjunct distribution of the genus may have resulted from interrruption of the continuous distribution of ancestral populations of extant peony species across the Bering land bridge during the Miocene. Pleistocene glaciation may have played an important role in triggering extensive reticulate evolution within section Paeonia and shifting distributional ranges of both parental and hybrid species.

Phylogenetics of Seed Plants: An Analysis of Nucleotide Sequences from the Plastid Gene rbcL