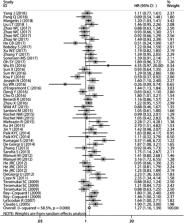 To evaluate the prognostic value of pretreatment lymphocyte counts with respect to clinical outcomes in patients with solid tumors.

Systematic literature search of electronic databases (Pubmed, Embase and Web of Science) up to May 1, 2018 was carried out by two independent reviewers. We included Eligible studies assessed the prognostic impact of pretreatment lymphocytes and had reported hazard ratios (HR) with 95% confidence intervals (CIs) for endpoints including overall survival (OS) and progression-free survival (PFS). Only English publications were included.

Lymphopenia as a prognostic factor for overall survival in advanced carcinomas, sarcomas, and lymphomas.

Leonid Gorelik,  Wendy Flavell (2001)
Strict control of T-cell homeostasis is required to permit normal immune responses and prevent undesirable self-targeted responses. Transforming growth factor-beta (TGF-beta) has been shown to have an essential role in that regulation. Owing to its broad expression, and inhibitory effects on multiple cell types of the immune system, TGF-beta regulation is complex. Through advances in cell-specific targeting of TGF-beta signalling in vivo, the role of TGF-beta in T-cell regulation has become clearer. Recent in vitro studies provide a better understanding of how TGF-beta regulates T-cell homeostasis, through multiple mechanisms involving numerous cell types.

Toshiyuki Kitano,  Kiyoshi Komuta,  Masahiro Tsuboi … (2009)
We examined the impact of pretreatment neutrophil count on survival in patients with advanced non-small-cell lung cancer (NSCLC). A total of 388 chemo-naïve patients with stage IIIB or IV NSCLC from a randomised controlled trial were evaluated. The effects of pretreatment peripheral blood neutrophil, lymphocyte and monocyte counts and neutrophil-lymphocyte ratio on survival were examined using the proportional hazards regression model to estimate hazard ratios after adjustment for covariates. The optimal cut-off value was determined by proportional hazards regression analysis with the minimum P-value approach and shrinkage procedure. After adjustment for prognostic factors, the pretreatment elevated neutrophil count was statistically significantly associated with short overall (P=0.0008) and progression-free survival (P=0.024), whereas no association was found between prognosis and lymphocyte or monocyte count. The cut-off value selected for neutrophil count was 4500 mm(-3) (corrected hazard ratio, 1.67; 95% confidence interval (CI), 1.09-2.54). The median survival time was 19.3 months (95%CI, 16.5-21.4) for the low-neutrophil group (4500 mm(-3), n=204) and was 10.2 months (95%CI, 8.0-12.3) for the high-neutrophil group (4500 mm(-3), n=184). We confirmed that pretreatment elevated neutrophil count is an independent prognostic factor in patients with advanced NSCLC receiving modern chemotherapy. Neutrophil count is easily measured at low cost, and it may be a useful indicator of patient prognosis.