Current Advances in Aptamers for Cancer Diagnosis and Therapy 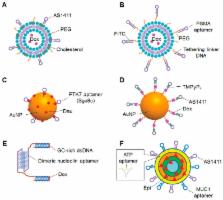 Nucleic acid aptamers are single-stranded oligonucleotides that interact with target molecules with high affinity and specificity in unique three-dimensional structures. Aptamers are generally isolated by a simple selection process called systematic evolution of ligands by exponential enrichment (SELEX) and then can be chemically synthesized and modified. Because of their high affinity and specificity, aptamers are promising agents for biomarker discovery, as well as cancer diagnosis and therapy. In this review, we present recent progress and challenges in aptamer and SELEX technology and highlight some representative applications of aptamers in cancer therapy.

L Gold,  C Tuerk,  James Mussell (1990)
High-affinity nucleic acid ligands for a protein were isolated by a procedure that depends on alternate cycles of ligand selection from pools of variant sequences and amplification of the bound species. Multiple rounds exponentially enrich the population for the highest affinity species that can be clonally isolated and characterized. In particular one eight-base region of an RNA that interacts with the T4 DNA polymerase was chosen and randomized. Two different sequences were selected by this procedure from the calculated pool of 65,536 species. One is the wild-type sequence found in the bacteriophage mRNA; one is varied from wild type at four positions. The binding constants of these two RNA's to T4 DNA polymerase are equivalent. These protocols with minimal modification can yield high-affinity ligands for any protein that binds nucleic acids as part of its function; high-affinity ligands could conceivably be developed for any target molecule.

Anthony Keefe,  Supriya Pai,  Andrew Ellington (2010)
Key Points Aptamers are single-stranded oligonucleotides that fold into defined architectures and bind to targets such as proteins. In binding proteins they often inhibit protein–protein interactions and thereby may elicit therapeutic effects such as antagonism. Aptamers are discovered using SELEX (systematic evolution of ligands by exponential enrichment), a directed in vitro evolution technique in which large libraries of degenerate oligonucleotides are iteratively and alternately partitioned for target binding. They are then amplified enzymatically until functional sequences are identified by the sequencing of cloned individuals. For most therapeutic purposes, aptamers are truncated to reduce synthesis costs, modified at the sugars and capped at their termini to increase nuclease resistance, and conjugated to polyethylene glycol or another entity to reduce renal filtration rates. The first aptamer approved for a therapeutic application was pegaptanib sodium (Macugen; Pfizer/Eyetech), which was approved in 2004 by the US Food and Drug Administration for macular degeneration. Eight other aptamers are currently undergoing clinical evaluation for various haematology, oncology, ocular and inflammatory indications. Aptamers are ultimately chemically synthesized in a readily scalable process in which specific conjugation points are introduced with defined stereochemistry. Unlike some protein therapeutics, aptamers do not elicit antibodies, and because aptamers generally contain sugars modified at their 2′-positions, Toll-like receptor-mediated innate immune responses are also abrogated. As aptamers are oligonucleotides they can be readily assembled into supramolecular multi-component structures using hybridization. Owing to the fact that binding to appropriate cell-surface targets can lead to internalization, aptamers can also be used to deliver therapeutic cargoes such as small interfering RNA. Supramolecular assemblies of aptamers and delivery agents have already been demonstrated in vivo and may pave the way for further therapeutic strategies with this modality in the future.

Marcel Bruchez,  C J Loweth,  A. P. Alivisatos … (1996)
Patterning matter on the nanometre scale is an important objective of current materials chemistry and physics. It is driven by both the need to further miniaturize electronic components and the fact that at the nanometre scale, materials properties are strongly size-dependent and thus can be tuned sensitively. In nanoscale crystals, quantum size effects and the large number of surface atoms influence the, chemical, electronic, magnetic and optical behaviour. 'Top-down' (for example, lithographic) methods for nanoscale manipulation reach only to the upper end of the nanometre regime; but whereas 'bottom-up' wet chemical techniques allow for the preparation of mono-disperse, defect-free crystallites just 1-10 nm in size, ways to control the structure of nanocrystal assemblies are scarce. Here we describe a strategy for the synthesis of 'nanocrystal molecules', in which discrete numbers of gold nanocrystals are organized into spatially defined structures based on Watson-Crick base-pairing interactions. We attach single-stranded DNA oligonucleotides of defined length and sequence to individual nanocrystals, and these assemble into dimers and trimers on addition of a complementary single-stranded DNA template. We anticipate that this approach should allow the construction of more complex two- and three-dimensional assemblies.

The first two authors contributed equally to this work.